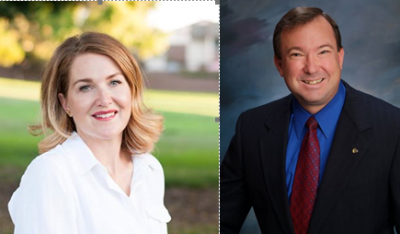 But trustee Gary Woods, who represents the El Cajon area in district 3 and directs a religious educational institute,  faces a challenge from Peggy “Liz” Weaver, a public school teacher of fourth and fifth graders at Rancho Elementary School.

On her Facebook page, she states, “I began teaching in 2004 and over the past 14 years I have been privileged enough to work with hundreds of families and children. I have seen first hand how important it is to build a strong relationship between home, school, and community. I believe that public education is our greatest asset, and that we need to do everything in our power to provide our children and families with programming to support all learners regardless of zip code, learning style, or background. As a parent of two boys and a teacher of many students who will enter the GUHSD, I have a vested interest in ensuring that our students and staff are well-supported. "

Dr. Woods was elected in 2014 and is currently vice president of the board.  According to his Linked In page, he is the executive director of Equip Biblical  Institute’s EBI International Network of Leadership Institutes through Shadow Mountain Church; he previously taught online courses including for Southern California Seminary and Liberty University. On the GUHSD, he promotes career technical education and has been a supporter of modernizing campuses in the district.  According to his bio, he holds a doctor of education in technology and learning degree from Alliant International University.