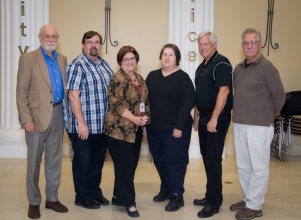 December 6, 2016 (La Mesa) – The volunteer citizens group overseeing the spending of millions of dollars in taxpayer-approved bonds for new and improved patient care facilities at Sharp Grossmont Hospital in La Mesa has elected its chairman and vice chairman to serve through June 2017.

ICBOC members are uncompensated East County residents who are charged with monitoring bond proceeds spent by the Grossmont Healthcare District (GHD), the public agency managing the bond-financed construction at the hospital. GHD serves as landlord of the hospital, including ownership of the property and buildings on behalf of local taxpayers.

Specific seats on the ICBOC are filled by individuals representing various constituency groups, according to ICBOC bylaws. Sparrow is serving as a representative of the San Diego County Taxpayers Association (SDCTA), while Olson is representing Grossmont Hospital Foundation and Auxiliary.

Sparrow, professor emeritus of SDSU’s School of Public Affairs with more than 25 years of experience in regional and municipal administration, has served on four other oversight committees: the City of La Mesa from 2008 to 2010, the La Mesa-Spring Valley School District from 2009 to 2015, the San Diego Community College District (where he also currently serves as Chair) from 2012 to present, and the Grossmont Unified High School District from 2015 to present. He is currently chair of the SDCTA’s Governance and Public Finance Committee. He has served on the ICBOC since 2011.

Olson, an East County resident since 1985, has worked with the County since 1990. His career has included managing construction and information technology projects, along with real estate property appraisal of residential, commercial and industrial properties. In his current position since 2006, Olson is involved in projecting assessed value and property tax revenue for the County, as well as 18 incorporated cities and 47 school districts. He also administers the Assessor Office’s Property Tax Exemption Program, the Reassessment Exclusion Program and manages property tax appeals. He also is a member of the County’s team that interfaces with bond rating agencies. He has served on the ICBOC since 2013.

The Grossmont Healthcare District, formed in 1952 to build and operate Grossmont Hospital, supports various health-related community programs and services in San Diego’s East County Region. The District is governed by a five-member board of directors, each representing more than 500,000 people residing within San Diego East County’s 750 square miles. In 1991, GHD opted to lease the hospital’s operation to Sharp HealthCare under a 30-year lease that runs through May 2021. The lease agreement between GHD and Sharp HealthCare was extended by voters in 2014 for an additional 30 years. For more information about GHD, visit www.grossmonthealthcare.org.