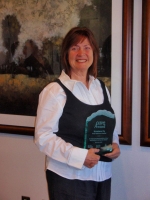 Scharlene Fry, RN, to be honored with luncheon at Hotel Del Coronado

December 25, 2009 (La Mesa) – Scharlene Fry, RN, has received the KYXY Cares Award, which recognizes nurses for making a difference for patients, the nursing profession, and the San Diego community. Sharlene worked at Sharp Grossmont Hospital during the time of her nomination. She has since retired from nursing, but revisited the hospital to reunite with former co-workers and accept her award.

Representatives from local radio station, KYXY 96.5 and Azusa Pacific University School of Nursing presented Fry with the award in mid-November. Fry will also be honored at the annual luncheon recognizing all winners from 2009, which will be held in June 2010 at Hotel Del Coronado.

According to the nomination submitted by one of her peers, Fry “is dedicated to her job, nurtures her nursing students, is very supportive to her fellow co-workers, and never fails to take the time to make you feel like you're making a difference in someone's life and that you're appreciated.”

Sharp Grossmont Hospital (www.sharp.com/grossmont) is the largest not-for-profit, full-service acute care hospital in San Diego’s East County, serving the community for more than 50 years. The medical center is a Magnet-designated facility, recognized nationally for nursing excellence, and is part of the Sharp HealthCare system.