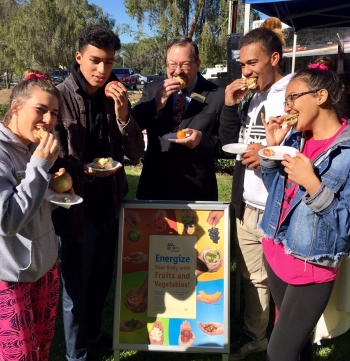 It’s part of an expanding statewide California Thursdays® program that does something rare – serves California food to California students. Grossmont Union High School District will kick-off the program at Grossmont High School during the media event and will begin serving weekly California-sourced meals to its remaining high school campuses in February.

“Why fight so hard to cook local foods from scratch rather than just heat-n-serve? Because Grossmont Union High School District thinks it’s the right thing to do for its students,” a press release from the District states. “California Thursdays is a win-win-win for schools and students, local farms and producers, and the environment. In addition to providing fresh, delicious meals that students devour, it boosts their health and readiness to learn, improves the district’s budget, strengthens the regional economy and cuts carbon emissions and waste.”

At an event during lunchtime today at Grossmont High School on the senior lawn, students enjoyed California burgers and veggie bagel sandwiches, made from all ingredients grown or produced in California.  Vendors gave out samples and educational displays taught students where the foods they eat comes from.