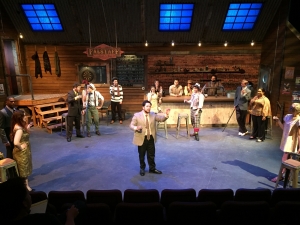 May 18, 2017, (La Mesa) - A fresh look at the old master. The Taming of the Shrew was one of Shakespeare's first plays. Director Brian Richel envisioned the play taking place in a brewery. I’m not quite sure it added anything to the story for me. But the play itself does work.

The backdrop of the brewery designed by Michael McKeon was gorgeous.  However, it was not used in the story; the brewery, a wonderful set, just set there while the story took place around it.

The actors were fabulous; they made the story come to life in this modern day tale of The Taming of The Shrew,  which had modern clothes and actions while talking Shakespeare. Both my niece and I enjoyed the evening.

My favorite performance would go to Santiago Valencia-Northrup as Petruchio. He owned his role. Jillian Jones played Katerina, taking Shrew to a whole new level. The entire cast of suitors and servants mastered the art of combining the past with the present succeeding in entertaining the crowd of the night.

Before the play begins, the cast is on stage enjoying the brewery lifestyle. The house band performs a song they wrote for the show entitled "Control." It embodies the theme of the play perfectly, adding another dimension to their talent. I enjoyed the bongo-like playing on the seat of one band member. I often found myself tapping my fingers against different surfaces, enjoying to the beat.and sounds they make.

If Shakespeare is your thing, you might enjoy this version if you can embrace non-traditional. You have three more opportunities to catch the show May 18, 19, 20th, at 7:30 p.m. in the Stagehouse Theater at Grossmont College..

If not,  perhaps you would enjoy the Summer Conservatory, where high school students perform with the college to put on Robert Louis Stevenson's Treasure Island. July 27 - August 5, 2017.

For tickets, call Alexis at 619.644-7234 or visit www.grossmont.edu/theatrebrochure.