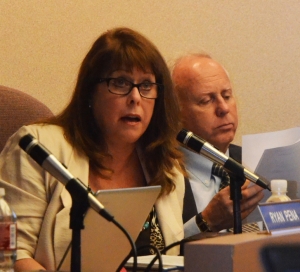 With a vote of four to one, the Grossmont Unified High School District (GUHSD) board made its intent clear. The majority does not wish to allow Alpine parents and students to leave the GUHSD and join forces with the Alpine Union School District. Board Members Robert Shield, Richard Hoy, Jim Kelly and Jim Stieringer voted against unification, while Board Member Priscilla Schreiber cast the lone vote in favor.

Unification would allow the Alpine district to become a K-12 district, adding high school students so that the AUSD could build the long-promised high school that Grossmont has failed to build.  Not even a scathing Grand Jury report has been able to prod GUHSD members into taking action. The Grand Jury admonished the board to either agree to build the high school by the end of last year, or cooperate with unification efforts. Instead, the board has done neither.

Alpine parents have secured enough signatures for the San Diego Board of Education to accept, which triggers hearings in Alpine and the GUHSD.   But without the support of the GUHSD, it's shaping up to be a battle at every step.

Before the discussion by the board took place, two citizens came forth to speak in favor of this unification. They also addressed the GUSHD Annual Report. Michael Waterman pointed out the report claims that the enrollment triggers for building an Alpine high school have not been met; he told the board “That is false.” He added, “The threshold number for the 12th High School was reached three times.”

He also told the Board that there have been “several bids for construction,” among them one in 2010 where major bids were asked for, but at no point has the school board moved to actually start building the 12th high school. Waterman added that staff, led by Dina Johnson, show expenditure in construction in 2012 of $700,000.

Waterman further said that the Board misrepresented this to the Grand Jury when they told the Grand Jury, “We have not issued any requests for bids as related for construction for the 12th high school.”

He pointed out to the Board that this is not a policy matter, since “the courts view bond issues akin to a contract.” Therefore, in Waterman’s view the GUHSD is breaking a contract with taxpayers.

Barbara Stevens added to Waterman’s thunder by telling the Board, “District staff altered the number set by the Board.” She added, “This material fact should not be concealed from the public.”

Before the vote, School Superintendent Ralf Swenson gave his report. He raised the series of issues that both the California Department of Education and the County Office of Education and the San Diego County Board of Education will ask. Among them are: the quality of the educational program and whether the makeup of the new district could lead to racism on campus, whether intended or not.

Staff will also have to deal with questions regarding debt, bonds and property, and equitable distribution of resources.

When the vote finally came, the resolution to oppose unification was introduced by Kelly. At that point Schreiber asked to address the board for more than the allotted time. She brought a five-minute statement and that was all she was going to say on the matter.

The Board agreed. She started by reminding the board that “on July 14, 2011 the governing board approved …the Superintendent’s recommendation for a 12th high school.” She also reminded them that Grand Jury finding number five “substantially revised the criteria to build the 12th High School in Alpine.”

Schreiber observed, “There is now no certainty that the Grossmont School District will ever build the 12th High School.”

She also reminded the Board members that in 2011, they agreed to start that school project by “releasing bids on the site development board.” She continued by reminded them that they have not done any of this. Schreiber pointed out that the project was submitted, but unilaterally pulled by the Superintendent in April of 2012.

Schreiber also said that several times the conditions have been close to being met that would lead to the construction of the Alpine High School. With unilateral control, so far the Board has refused to build the school--despite two bond measures approved by voters and the Grand Jury report.

When she was done, Schreiber received resounding applause from the audience.