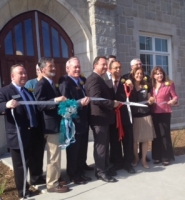 May 3, 2014 (El Cajon)- Students, faculty, alumni of the schools in GUHSD, and the community turned out Thursday May 1 to celebrate the dedication of the district’s new district office.

Superintendent Ralf Swenson gave a brief welcome and thanked everyone for coming. The Grossmont High red robe choir sang the national anthem. Then, everyone said the pledge of allegiance. 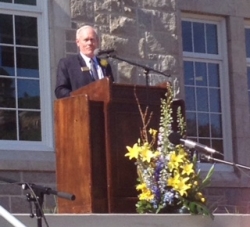 The red robe choir performed two other songs- “Anything Goes” and “Light of the Clear Blue Morning.”

Swenson added, “Grossmont is the only early high school in the 20th century. It took a couple years to build it from 1920 to 1922.” He also listed a couple facts: “Grossmont High is the only high school that can boast three astronauts among its alumni.. and the only one that has a museum.” He concluded, “When we started remodeling a couple years ago, I got lots of phone calls and emails saying ‘Don’t you dare tear down that building!’.”

Next to speak was Deputy Superintendent Scott Patterson. “We’re thrilled after 92 years to provide a new district office… It became a new district office in 1958… We literally took this building down and remodeled it inside.” He listed what they remodeled and the new features, which include “central air conditioning, [reuse of existing] wood flooring, new plumbing, preserved the structure, maintained wide original hallways… Thanks to Turner Construction, LPA” among others.

Other building features listed on a paper include: 1) replacement of existing fixed windows with high efficiency, operable wood windows in keeping with the original wood style, 2) removal of late addition structures to open up the interior floor plan, reclaim original courtyard views and allow daylight and natural ventilation to once again flow through the building, 3) preservation of interior structural elements and exposing them as unique design features, including roof truss systems, wood beams and columns, 4) recreating the Gothic arch wood entry doors to preserve the original entry, 5) renovation of east and west courtyards to accommodate use by students and District staff, 6) creating interior areas for preservation and historical displays, in collaboration with the District’s museum curators, 7) removal of exterior canopy sun shades and window mounted air conditioning units from the façade of the building, 8) all-new HVAC, electrical, lighting, fire protection and communication system updates, and 9) addition of modern design features such as steel and stone tile stairs, stainless and glass handrails, glass conference rooms, exposed ductwork and curvi-linear (arched panel) ceilings.

Mayor Bill Wells was then introduced. “It’s good to be here… El Cajon is very proud to have had a part in this… It’s difficult to make a decision to spend money wisely and properly... it was a win win win situation…”

Deputy director Michael Harrison spoke next. “On behalf of Congressman Hunter, I want to thank you for allowing us to be a part of this celebration.. Today is an exciting day…”

Swenson then recognized Catherine Martin from Human Resources, who help put this event together. He introduced Robert Shields.

“Thank you for coming today… Grossmont Union High School District has a rich past.. and a bright future. I extend our appreciation to El Cajon.. and to our administration.”

Inside, on the first floor, there were new offices for the superintendent, a break room, assessment/educational technology services/student support services, payroll, conference rooms, mail room, workroom, human resources, and TVs on the wall. The conference room contained old memoriabilia from the past including old letterman jackets, what the girls PE uniform used to look like, and a graduation program among other things. There were also new offices for business services and fiscal services, and pictures of the GUHSD board. 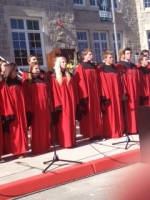 ECM also got a comment from Schreiber about her thoughts on the new district office. “It was well worth the wait.. to construct the new office. It’s a great opportunity to showcase what we’re doing in the district.”

A paper also included what it was like ‘Building a new Grossmont’: The original Grossmont High School classroom building was constructed in 1922. As the campus expanded and new buildings were added, it was converted to the GUHSD District Office in 1958. The modernization of the District Office actually involved two separate buildings, the Stone Building and the Old Main, both of which required comprehensive utility, environmental and seismic upgrades to meet current safety, Americans with Disabilities (ADA) and Field Act compliance standards. The project team went to great lengths to assure that modern improvements and traditional architectural features were successfully blended in order to honor the building’s rich history. The majority of the funding for this project is from former redevelopment funds, primarily from the City of El Cajon. The remaining balance of the project funding comes from the district’s capital facilities fund and Propositions H and U. Proposition H and U resources will be used specifically to bring the structure into compliance with ADA standards, including an elevator and wheelchair accessibility.’  More information about the bond program is available at: http://proph.build-guhsd.com/Pages/GUHSDhome.aspx.