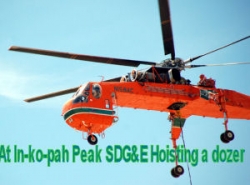 “The pattern of Sunrise Project helicopter incidents is troubling to the CPUC and is of serious concern due to the safety risks such incidents impose on the residents of Imperial and San Diego Counties and project personnel,” Julie Fitch, CPUC director of the Energy Division, wrote in a letter today to Patrick Lee, vice president of the Sunrise Powerlink Transmission Project.

The CPUC action follows a special investigative report by ECM exposing a history of safety issues and a strongly worded letter from Supervisor Dianne Jacob warning that public safety was being placed at risk. Her letter followed a report late last week outlining numerous safety incidents, including sky crane helicopters dropping two 16,000-pound tower lattice structures, an air compressor, and other items. A San Diego Union-Tribune article subsequently reviewed unreported rotor strikes of boulders and a fence post due to pilot error—including a pilot previously grounded for a fatality accident. 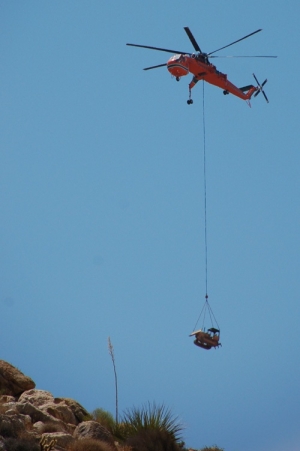 ECM has interviewed residents with additional complaints. Milt Cyphert in Lakeside has informed ECM that an SDG&E Powerlink helicopter flew a suspended load over homes in Lakeside, which would be a direct violation of the law.  Cyphert said he filed a complaint with the FAA, but not the CPUC.

Catherine Gorka, also a Lakeside resident, has repeatedly claimed that helicopters flew closer than a designated no-fly-zone distance over her aviaries. Lou Russo, an Alpine Planning Group Member, has indicated he received complaints from a Carveacre resident who alleged an SDG&E helicopter flew a suspended load over her home as well.

The CPUC found SDG&E in violation of mitigation requirements. Helicopter operations may only resume if CPUC is assured that specified remedial actions will be taken, including a safety stand down session for its personnel and a rigging training session.

In addition, outside of tower assembly and wire operations, helicopter operators will in future be restricted to sites designated as helicopter access-only—meaning access roads must be used for ground crews where possible. New incident reporting procedures must also be submitted for review and approval by the CPUC.

The safety stand down applies immediately to all helicopter operations (other than moving the helicopters to secure locations).

Readers:  If you have photos, video, or eyewitness accounts documenting helicopter violations on Powerlink construction, please forward them to editor@eastcountymagazine.org.