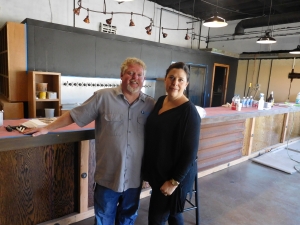 November 24, 2016 (Santee) -- San Diego’s seemingly ever-growing craft beer industry shrank a bit earlier this year, when Twisted Manzanita Brewing threw in the towel and shut down its operations in Santee.

But that unfortunate situation provided a chance for another brewer to expand and jump-start its growth plans.

Grantville-based Groundswell Brewing Co., only three years old and making less than 1,000 barrels this year, purchased most of the assets out of bankruptcy in a deal that closed in October.

While President Kevin Rhodes declined to reveal what he paid for primarily beer making equipment, he was definitely thrilled at his prospects thanks to the increased capacity he acquired.

“This was an opportunity that came up that is going to push (growth) a lot faster,” he said.

From his company’s modest production this year, it should hit between 2,500 and 3,000 barrels next year, he said. Also in the cards next year is putting its beer in cans and expanding its sales beyond San Diego.

Rhodes was already familiar with Twisted Manzanita, having brewed 70 to 80 percent of his production in Santee, essentially leasing their tanks. Yet he never saw any inkling that things were going downhill, he said.

According to the Chapter 7 filing in federal bankruptcy court, Twisted Manzanita Ales Co., owned by Jeffrey Trevaskis of Jamul, listed total assets of nearly $230,000, but had total liabilities of $892,000. It had 91 unsecured creditors who filed claims totaling $511,000.

The brewery, whose bottles and cans could be purchased at many local outlets, reported generating gross revenue of $1.4 million last year, up from $1.3 million in 2014, according to its April bankruptcy filing.

Groundswell made only 300 barrels in its first year, but nearly tripled that amount in 2014. Along with the increased production he now gets, Rhodes said he’ll expand his staff by five to seven workers to bring his total to at least 15. The new positions include a brewer, two cellar workers, an operations and events position, and a tasting room person.

The brewery will maintain its tasting room on Riverdale Avenue in Grantville but brew all its beer at the Santee location.

While most of the renovations to the existing brewery are cosmetic, visitors will see a distinct change when it reopens in mid-January, said Christianne Penunuri, Rhodes’ wife.

For one thing, the tasting area will be much lighter, and inviting, especially to women and families. “It’s important to me as a woman that our tasting rooms are comfortable, that they’re family friendly, dog-friendly, that everyone, including women, feel comfortable,” Penunuri said.

To that end, Rhodes is getting rid of a smoking area outside the brewery, converting it into a garden. There will also be loads of games, including a giant Jenga set to keep folks engaged. “We want to create a place that families can bring their kids, and where they can hang out,” he said.

Eventually, Groundswell will also get into the making of spirits, which was a side business of Twisted Manzanita. Currently Rhodes is in the process of obtaining the proper licenses for this business.

While the company had to borrow funds to complete the brewery purchase, Rhodes said he’s currently seeking investors to help him grow at a quicker pace. He said he’s putting up 10 to 15 percent of the company’s equity to raise between $500,000 to $600,000, which would value Groundswell at least $5 million.

Given Twisted Manzanita’s failure, and the closure of a few other breweries such as El Cajon’s URBN Street Brewing (which closed its brewery, though the restaurant remains open), and the layoff of 60 workers at Stone Brewing recently, could the golden days of craft be nearing an end?

Not at all, Rhodes responds. “I believe there will be more consolidation but that’s part of every industry,” he said. “The interesting thing is that there’s only been about two to three recent closures. If you look at the restaurant industry, there are consolidations and closures happening all the time.”

In a related Santee beer story, the big Karl Strauss project that was supposed to be underway by this time still hasn’t broken ground, although the company must be serious since it purchased the 10-acre site for $5.4 million in January. According to Santee senior planner John O’Donnell, the brewer is talking with Preserve Wild Santee about concerns the environmental group has with the project.

Plans revealed by Karl Strauss last year show three buildings at the site on the corner of Cuyamaca Street and Town Center Parkway, including a brewing house, a tasting room, a restaurant, office space, and a warehouse building. Initial employment at the company’s new headquarters was estimated at 100 to 150 people, but would eventually grow to about 300, according to co-founder Matt Rattner who spoke to the City Council about a year ago.

Rattner didn’t return a request for comment for this story.

Karl Strauss has been in an aggressive expansion mode in recent months, opening breweries and brew pubs in downtown Anaheim and Los Angeles. It now has 10 breweries/ restaurants including five in San Diego County. Last year it was ranked the 46th largest craft brewer in the nation with sales of about $50 million.