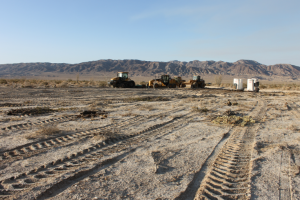 First, it alleges that the BLM illegally amended the California Desert Conservation Area Plan to allow wind energy development in an ineligible area that lacks the required wind resources.   Pattern claimed during the approval process that it’s facility would power 125,000 homes – a figure that was mysteriously reduced to 94,500 by the BLM after approval.

Pattern has claimed wind speeds of 13.89 mph at the heights turbines would be built; that equates to only a Class 2 “fair” to “marginal” wind resource area--substandard by the BLM’s own standards. In fact, the BLM previously excluded areas with less than Class 3 wind speeds from eligibility for a land use amendment and further, authorized no plan amendments for any area in California, per the BLM’s Wind Energy Development Progrommatic EIS.

In addition, the suit alleges that the BLM and Pattern failed to meet obligations to 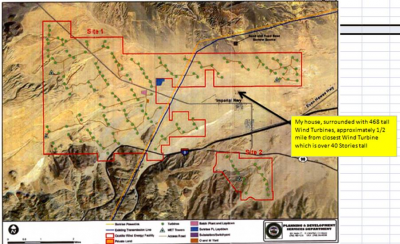 the community and that both falsely claimed the project will be five miles west of Ocotillo, when in fact the project surrounds the small desert town on three sides—with some turbines less than a half-mile from residences.

The town’s 400 resident , primarily poor and elderly people, moved there to enjoy views of five mountain ranges and star-studded nights in a peaceful setting. They should not be subjected to industrial development and potential health risks, the suit contends.

“Pattern willfully limited its analysis of financial and environmental impacts to shield NEPA [National Environmental Policy Act] on the Project’s disproportionate impact upon low-income communities, in violation of Executive Order 12898,” the suit states. 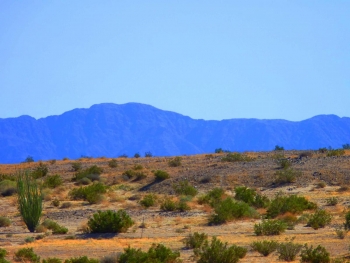 The park is a designated National Landmark as well as a Biosphere Reserve designated by the United Nations.  The Jacuumba Wilderness area is also just 2,400 feet away.  Plaintiffs contend the wind project would negatively impact the number of park visitors and thus the state and local economies.

The project would span an undisturbed area the size of San Diego’s Mission Valley, nearly 8 miles long and 19 square miles in area with 112 turbines, each 439 feet high—239 feet taller than the Coronado Bay Bridge and 134 feet taller than the Statue of Liberty.  Each turbine weighs over 305 tones, with blades that extend 354 feet in diameter-the size of a football field.  Massive foundations for each turbine will consume 203 acres.

The lawsuit further contends that the project jeopardized a federally protected aquifer that is Ocotillo’s sole source of drinking water dating back to ancient Indian wells 15,000 years ago. The aquifer is situated directly beneath the wind project.  Water levels are less than 30 feet below the surface in places, yet foundations would be 40 feet deep or more.

Water has been illegally pumped from the Ocotillo-Coyote Wells SSA and stored for project needs in an unapproved pond near the Jiminez mine, which is infested with tamarisk—a non-native invasive plant species that can damage groundwater supplies.  Morover, the suit contends the project’s Water Supply Assessment was analyzed under “false pretense-promulgated by Pattern-that the Project will not receive water from a public water source.”

Plaintiffs accuse the El Centro field office of the BLM of failing to follow a nationally mandated process, noting that geotechnical work for previously undisclosed turbines is being done in the field simultaneously with construction. “This is illegal and the project must be stopped to afford legal NEPA review,” the suit states.

The project further violates the Federal Land Policy and Management Act (FLPMA). Located in an area where visual changes “must be moderate or lower and may not dominate the viewshed and must maintain predominantly natural features” the project has instead bulldozed vast swaths of desert and federal waterways, also altering drainage without required permits from the Army Corps of Engineers. Pattern’s contractors have also mowed down the ocotillo groves for a project that aims to erect turbines each taller than a 40-story building. Clean Water Act standards have been violated, the suit contends.

Nor were permits obtained as required from the Federal Aviation, even though the project is five miles from a naval live-target bombing range, the suit contends.  The U.S. military has found that wind turbines interfere with aviation radar.

The suit further charges that material changes were made after project approval of turbine locations and project boundaries—without due process or public disclosure and involvement, and without government-to-government consultations and analysis.

“Public projects cannot, as a matter of law, be a moving target with material changes made after final approval,” the suit concludes.

The lawsuit, filed in the U.S. District Court, Southern District of California in San Diego, seeks temporary, preliminary and permanent injunction to immediately half the project, as well as other injunctive or equitable relief that the Court may deem just.

As you recently pointed out Miriam, this project's rife with corruption. They could only keep it submerged for so long.