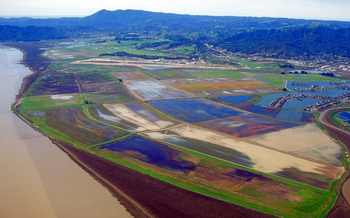 Photo:  Conservation groups would like more funding to restore wetlands at the site of the former Hamilton Air Force Base in Novato. (U.S. Army Corps of Engineers)

June 24, 2021 (San Francisco) - Sea levels in California are projected to rise up to 55 inches by the end of the century, so climate advocates are calling on Congress to fund coastal restoration projects to mitigate potential flooding.

More than 100 groups signed a letter calling on lawmakers to include $10 billion for such projects nationwide in the proposed infrastructure bill.

"At the same time that the skies turn orange from wildfires, our coasts are moving inward," said Fortgang. "And this is a major issue because in California 85% of our residents live and work in coastal counties."

Reports done for the Governor's Climate Adaptation strategy predict that if nothing is done, coastal flooding could threaten $100 billion in property and infrastructure.

The state already has a list of shovel-ready projects including restoration of wetlands from San Diego to Santa Barbara and construction of a living shoreline around San Francisco Bay.

Jean Flemma, director of the Ocean Defense Initiative and co-founder of the Urban Ocean Lab, said natural projects have proved more effective at protecting the shore than hard infrastructure such as sea walls.

"Rebuild a wetland, or restore a marsh or sea-grass beds," said Flemma, "so that you are creating a natural buffer between the coast and the communities, and the rising seas and more intense storms that are happening now as a result of of climate change."

Advocates estimate that coastal resilience projects would create tens of thousands of jobs for engineers, biologists and cleanup and construction crews.

A 2017 analysis from the National Oceanic and Atmospheric Administration found that coastal-restoration projects funded with stimulus dollars created around 15 jobs per million dollars of investment.