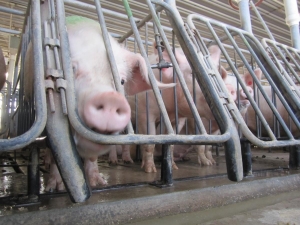 November 9, 2014 (Sacramento) - Pharmaceuticals - they're what's for dinner. Now three groups in the U.S. are suing the federal government over the drugs.

The Humane Society of the U.S. (HSUS), United Farm Workers of America and the Animal Legal Defense Fund filed a lawsuit in San Francisco over a new cocktail of growth enhancing drugs and antibiotics.  Hannah Connor, a Humane Society staff attorney, says the cocktail is fed to millions of pigs, turkeys and cows.

She says the three groups filed the lawsuit over what she calls the Federal Drug Administration's failure to investigate the long-term effects of the drugs.

"We think that they need to take a really hard look and make sure that when approving these varieties of drugs that have huge impacts, not only to the environment, but also to animals and to workers and to human health, that they really need to do a meaningful review," she stresses.

According to the HSUS, the FDA has never prepared an Environmental Impact Statement or an environmental assessment on the combined effects on farm animals.

The lawsuit asks the court to set aside the FDA's approval of the drugs until the agency performs a review, which is required under federal law.

At the center of the lawsuit is the drug ractopamine, as well as combinations of the drug with other growth hormones and steroids, many of which have been banned in other countries, including China and Russia.

Eli Lily & Company, a leading producer of ractopamine, says it's safe and effective, with no confirmed human health effects.

Conner says studies that have been conducted in the U.S. regarding the drugs are troubling.

"What they actually showed was some real concern, especially when the drug is absorbed directly by a human," she says.

Connor adds that the overuse of antibiotics for animals can cause them to become ineffective in humans.

Other major concerns for the groups are what they say are well-documented, adverse effects the drugs have on the animals, the exposure to the drugs that farm workers face and the vast amount of animal waste from large scale farms that leaches into water and soil and can adversely affect wildlife.

People still eat animals, considering all the chemicals in their bodies?