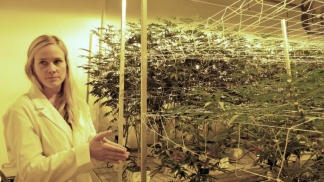 November 27, 2017 (El Cajon) – As cities grapple with how to regulate marijuana-based businesses, Outliers Collective, the county’s only legally licensed medical cannabis dispensary, provides evidence of advantages to licensing and regulating facilities, including product safety testing for consumers, security for employees, and avoiding problems caused by illegal pot shops such as crime, fire hazards, and products contaminated with pesticides. 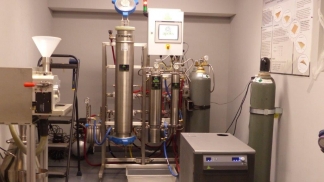 Owned by Outco Labs, Outliers is a collective that includes not only a pharmaceutical style dispensary, but also indoor growing rooms.  “Almost everything here is made by us,” says Lincoln Fish, chief executive officer of Outco says during a media tour inside the Outlier’s Collective near Gillespie Field in unincorporated El Cajon.  “We can grow on behalf of our members.”

The Sheriff’s rules are much stricter than local cities’ requirements, he says.  At Outliers, materials from suppliers are inspected.  “Insecticides are way too prevalent in the industry,” says Dr. Allison Justice, showing us a clean room environment where C02 extraction is done, similar to that which is used elsewhere for fruits and flowers.  “Eighty percent have unsafe levels of pesticides.” 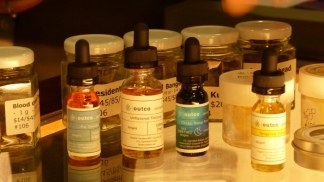 ts medical marijuana products are free of synthetic pesticides. They use natural products such as rosemary oil, a benefit of growing in indoor greenhouses.

Products that they sell include liquids, tinctures, oils that can be dissolved under the tongue, cannabis that can be smoked, solvent-free products that can be vaporized, and ointments to rub on for pain relief.  They don’t sell edibles, which county law prohibits for now.  Although recreational pot will be legal in California starting January 1st, the County has not legalized sales of recreational products and Outliers has no plans to expand beyond the medical market at this time.

Their customer base may surprise you.  “The average age here is 57,” Fish says. “We get a lot of veterans.”    Many come for relief from aching joints, relief from nausea due to chemotherapy, or other painful and disabling conditions.

Their staff, in a room with a glass display case showcasing products, offers information on differences between various varieties.  “CBD, cannabidiol, is the most effective anti-inflammatory,” says Fish, adding that it’s much more effective than ibuprofen.

Products include ointments for joint pain that don’t make the patient high, in scents such as tangerine. Other products at Outliers taken orally or smoked contain varying levels of THC, Tetrahydrocannabinol, the psychoactive ingredient in marijuana that produces highs.  Some are low levels, just 10% to produce a mild sedative effect; others have higher levels. 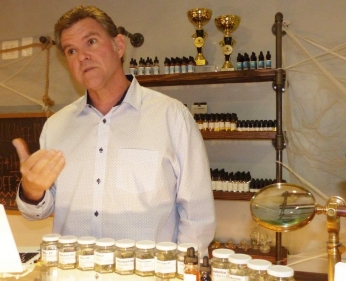 There are some branded products, too; coming soon, they’ll be launching a Ricky Williams line named after the football player.

Dr. Justice describes Outlier’s growing facilities as “light deprivation greenhouses” that utilize energy-saving LED lights to produce higher output.  Soon they plan to double stack plants. Currently, each room has about 50 plants, some flowering and soon to go through a ten-day drying process.

Special software and high-definition cameras in the grow rooms look for fungus and powdery mildew –a level of protection you’re not likely to find in the many illegal pot shops that seem to sprout up around the county faster than mushrooms after a rain storm.

That’s important.  CBS Los Angeles reported that a California man died of a rare fungal infection  from contaminated medical marijuana. That led to testing which found 20 samples statewide contaminated with deadly bacteria or fungus. Cities and counties can protect patients from such hazards by requiring inspection and testing for bacteria, fungus, insecticides and other contaminants.

Illegal pot shops have created major headaches for cities and law enforcement. El Cajon has shut down numerous illegal facilities including one found to be storing gasoline in cans on a building rooftop in direct sun – posing a clear danger of explosion and fire.  Some have sucked up electricity illegally.  Neighbors have complained of odors wafting from illegal operators. (Outliers does not allow smoking on the premises.)  In Poway, an illegal pot shop exploded, causing a fire. In Spring Valley, pot shops have been repeatedly robbed, including cases where customers or employees were assaulted, yet the illegal operations don’t report such crimes to authorities and have even refused to allow Sheriff’s deputies to enter the premises, as ECM recently reported.

At Outliers, video cameras inside and outside provide 24/7 surveillance – and the Sheriff’s department has access to those videos, a key deterrent to crime.  There is a heavy security door, metal detector and a guard at the door, ushering patients into a professional looking lobby.

Asked how many times Outliers has been robbed since it opened three years ago, Fish replied, “None. We had one robbery attempt.”  He says robbers tried to cut through the security door with a small torch but failed.  “Then they tried a crowbar and set off alarms.  We called the Sheriff. The cops caught them before they reached the end of the street, driving with their headlights off. We have a good relationship with the Sheriff.”

Sheriff’s spokesman Ryan Keim confirms, “There was an attempted burglary at Outliers and the suspects were arrested.”

The facility is drawing the attention of some public officials. Encinitas Mayor Catherine Blakespear was on the tour.  “We want to preserve agriculture,” she said, noting that her city recently created a “fruit forest” of fruit trees on public property.  Bob Echter, a prominent flower grower, recently asked the city to consider allowing a portion of his crops to be marijuana on the former Ecke poinsettia ranch site.

After the tour, she said of the Outliers facility, “It’s highly professionalized. That’s what you want to see. The entire point of legalizing and regulating is bringing it out of the shadows,” though she mused of growing in greenhouses, “It’s not a close connection to the land.” Encinitas voters will decide in an upcoming ballot measure whether to allow marijuana as an agricultural crop.

Access and professionalism are important to patients, too.  Outliers does not prescribe; patients must get prescriptions elsewhere. But some HMO plans don’t allow doctors to prescribe medical marijuana, placing patients in a quandary; how do you find a doctor to prescribe?

The shadowy world of illegal dispensaries and online referral services

In reporting on this story, I decided to investigate the world of illegal dispensaries for comparison.

Posing as a patient, I checked Weedmaps.com.  After stopping by two illegal sites advertised only to find they had been shut down by authorities, I found one still open in Lemon Grove.

It had a storefront that had no sign, dirty windows, a grimy yellowed floor and a clerk behind a caged entry with dimly lit stairs ascending upstairs. A kiosk allowed would-be patients to insert a driver’s license and get instant access to a prescription online. (I declined.)

Should forms of medical marijuana that don’t make people high, such as ointment rubs for joint pain, be easier to obtain without making patients skulk around unsavory places, fearing for the quality of the products, their personal safety, and the security of their identification?

Should patients who do need psychoactive versions for legitimate medical reasons—such as veterans seeking pain relief or cancer patients undergoing chemotherapy-- be able to find doctors and dispensaries that are set up professionally, that test products for purity and potency, in a crime-free environment?

Ironically, some allow prescription of opioid narcotics, but not medical marijuana – not even pain rubs that don’t create a “high.” Should healthcare plans be required to provide coverage or at least allow doctors to prescribe?

These are questions that civic leaders should seriously consider, when balancing legitimate concerns such as keeping marijuana out of the hands of minors and protecting the rights of neighbors and the safety of communities, versus the needs and safety of patients.

San Diego County Supervisors recently voted to outlaw all recreational sales and over five years, to shut down even medical marijuana sales, defying the will of voters who have approved initiatives legalizing both.  County residents could grow their own pot plants (up to six, but only if your landlord doesn’t object), but would not have legal access within the unincorporated areas to any medicinal forms, let alone smoking products.

Meanwhile any form of marijuana remains illegal under federal law, and it’s an open question whether the Trump administration may opt to crack down on even operations legal under state laws.

As for whether Outliers will ultimately be forced to shut down due to the Supervisors’ vote to phase out all dispensaries, industry insider believe that’s unlikely.

Efforts are underway to put an initiative before county voters.  In addition, the marijuana industry is flexing its financial muscle to back Supervisorial candidates who favor repealing the newly enacted restrictions.  With term limits and open seats in the 2018 and 2020 elections, the likelihood of those restrictions going up in smoke appears high.