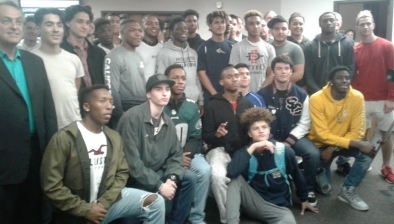 January 23, 2018 (El Cajon) - At Monday’s Grossmont Union High School District (GUHSD) Board Meeting, recognition was given to top sports teams for their victories and their “sportsmanlike” conduct.

Helix Charter, Monte Vista and Steele Canyon high schools all won CIF-SDS 2017 Champions, and West Hills Gymnasium is named in honor of David C. Hunter after a GUHSD vote, while the Steele Canyon 2017 SoCal Regional Football Champions and “West Hills Way” were accoladed as being “sportsmanlike.”

One speaker complimented the Steele Canyon football team as being sportsmanlike, and cited as an example a game that opened in a sharing of a jersey of a deceased member of the opposing team.

Another speaker said "This (is) remembered as the best team we've ever had," referring to the 2017 football team at Steele Canyon.

The gymnasium at West Hills High School was named the David C. Hunter Gymnasium by a 5 -0 vote of the GUHSD School Board at the same meeting. 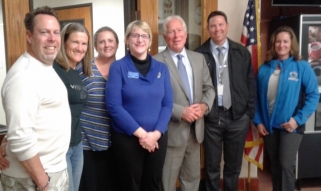 Hunter was one of the founders of West Hills High School. “He designed what would become an exemplary athletics gymnasium facility for the County,” said Principal Robin Ballarin. Hunter, who passed away in 2017 after his retirement, was “an exceptional individual whose special contribution to West Hills High School merits an extraordinary honor.”  Ballarin added that Hunter "fulfilled the promise of the 'West Hills Way' that ‘we play fair and in a sportsmanlike manner.'"

The "West Hills Way" includes, according to the Principal, Ballarin, academics first, treating fellow students, teachers, staff, and visitors well, no cliques, no put-down, greeting friends but saying no to drugs and alcohol, use of good language instead of being profane or vulgar, dressing properly and "playing hard but fair and in a sportsmanlike manner." 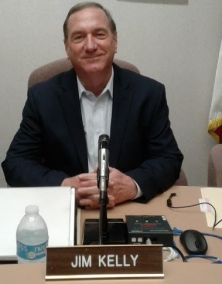 School Board Trustee Jim Kelly thanked the people from West Hills High School in the picture above, on behalf of the GUHSD School Board, saying “I just want to thank those who came out to speak. It’s an honor for all five of us to support this,” shortly before the vote to rename the gymnasium.