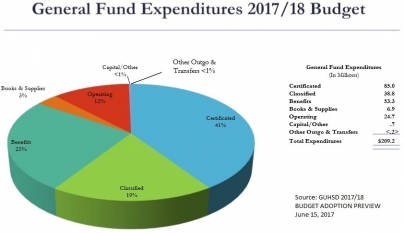 June 30, 2017 (El Cajon) – Today is the last day of the fiscal year, and Grossmont Union High School District (GUHSD) ultimately lays off nine teachers and six classified employees effective today, according to Catherine Martin with GUHSD. This is down from 35.4 teacher lay-offs and 21 staff eliminations originally resolved. 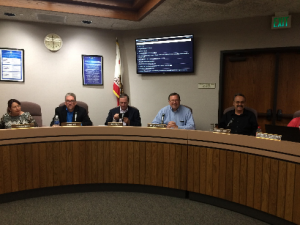 Photo: the GUHSD Board of Trustees met June 19 to approve the Local Control and Accountability Plan (LCAP) annual update and the budget for fiscal year 2017-18.

Click for the LCAP, LCAP presentation or executive summary.

This year’s LCAP annual update was 160 pages. Theresa Kemper, GUHSD Assistant Superintendent said during the budget hearing on June 15, “It has gotten very large since it started and the idea was a quick 40 page document on what your district is doing under the local control… There was a large focus on engagement of our community to include educators, parents, community and students.”

Board President Robert Shield had this to say regarding the LCAP and its response to community concerns. “Community input included a desire for Career Technical Education (CTE) opportunities for students, which we clearly addressed. Parents also requested better communication via the school web page, which helped prompt a uniform web template that staff at our school sites could easily keep updated. Parents and students requested more services related to the social/emotional domain. We address that area with activities like Camp Lead, Unity Days, and family resource center services.”

Included in the LCAP is $6 million for CTE, $1.43 million for new Chromebooks for the Future Forward Initiative (1:1), $1.1 million for English language development courses, $680,000 for family resource centers and $303,229 for a child development center to assist pregnant and parenting teens to stay in, and graduate from, high school.

Catherine Martin, GUHSD’s Director of Public Affairs and Legislative Relations, had this to say regarding Grossmont’s only web developer Lina Liang’s claim that race played a factor in her lay-off and is a breach of contract, “The web developer position has not been outsourced. The District does not have a need for web development work and the position was eliminated due to budget necessity.” 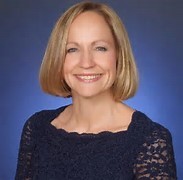 When pressed about the $1.2 million budget shortfall, Martin told East County Magazine, “The $1.2 million of expenditures greater than revenues reflects expenditure of funds intentionally carried over from 2016/17 into 2017/18 on the CTE program.”

On the IOU from the state, she says, “We did not budget the funds proposed by the Governor in his May revision to be received in 2019.  However, we believe the final budget agreement between the Governor and the Legislature includes some one-time funds in the 2017/18 year, though at a lower level than the Governor had proposed for receipt in 2019.”

According to District Superintendent Tim Glover, PhD, the Governor is reducing the minimum funding guarantee to GUHSD by suspending the Test 3B under Proposition 98 for the period of 2018/19 through 2020/21.  Test 3B is known as the "equal pain/equal gain" provision which requires Prop 98 spending increases to be no less than the rest of the state budget.

The total reduction is forecast to be around $900 million over that period.  The Grossmont District share of that would be about $2 million.