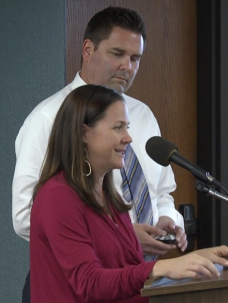 January 28, 2018 (El Cajon) - The Grossmont Union High School District (GUHSD) has completed its first semester of integrated math successfully, according to Jade White and John Berray, who gave details on the roll-out at January’s governing board meeting.

Throughout high school in the GUHSD, students and teachers will discuss elements of algebra, geometry, trigonometry and analysis each year, instead of segregating the studies into one-year courses.

What used to consist of first algebra, then geometry, and then algebra 2 “was the old way we are now moving to the integrated pathway,” explained White and Berray.

According to the National Council of Teachers of Mathematics, students in nations that teach integrated mathematics regularly score higher than students in the U.S.  In 2011, NCTM President J. Michael Shaughnessy observed that 90 percent of the world’s nations use the integrated match approach.

The roll-out began in fall and with freshmen who will graduate in the class of 2021 and will continue with each new class.

White and Berray also announced they are beginning to brand #GUHSDMATH on behalf of the district.

Last year, before the roll-out, the district checked in with stakeholders and the team narrowed potential textbook providers to two: Mathematics Vision Project (MVP) and College Preparatory Mathematics (CPM).  After more workshops and collaboration, CPM was selected.

White and Berray said there is faculty buy-in to the project. They also explained that problems in districts where integrated math was implemented to all four years at once has compelled the district to implement it one year at a time.

Alternate Student Board Representative Michael Nishikawa commented that AP courses would have to be taken in addition to three years of Integrated Math. 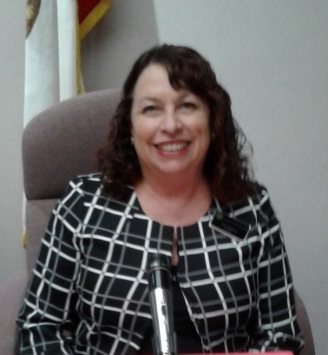 Trustee Elva Salinas commended the team, “Congratulations on all this work! This is amazing and I really appreciate the fact you incorporated the knowledge of all the teachers and then actually asked for the student voice.”

Salinas asked about their plans for supplemental instruction tutoring, to which Berray replied, “I would say that would be more of a site decision,” but acknowledged that “there is a section of students that probably need concurrent support.”

Salinas added, “I did basic skills coordination; how did you get your math teachers to buy in?”

Berray replied, “I would say through many meetings, lots of discussions, and the leadership of the department chairs. We sort of just headed towards that direction,” and acknowledged, “Not all teachers are probably enthusiastic about this, but most of them are.”

Board Vice-President Chris Fite asked how this lines up with college tracks and was told that as long as the student completes all three years of integrated math, the program fully meets college algebra through geometry requirements.

At the same meeting, recognition was given to Helix Charter High School’s Football and Girls Tennis and Volleyball Teams, and the Football teams at Steele Canyon High School and Monte Vista High School.