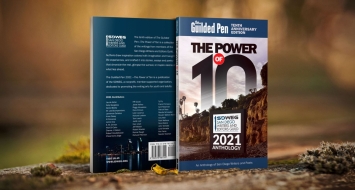 December 6, 2021 (San Diego) – For the past 10 years, the San Diego Writers and Editors Guild has published collections of short stories, poems and imaginative essays by its members.  This year’s edition, titled The Guilded Pen – The Power of Ten is now available for sale through major outlets such as Bookshop, Barnes and Noble and Amazon.

According to the SDWEG website, “Authors drew inspiration from the title, colored their writing with imagination and true-grit life experiences, and crafted it into stories, essays and poetry that chronicle the real, glimpse the surreal, or inspire visions of what lies ahead.”

For more information on this edition and past editions, visit https://sdweg.org/The-Guilded-Pen-Anthology

Cheri Seymour, the author of "The Last Circle", came to our San Diego Writers & Editors Guild for me to review her book in the East County Magazine. A radio interview about the book is here.

I am a proud former member of the San Diego Writers & Editors Guild, where I was atually introduced to the East County Magazine, which would lead to my writing more than 400 book reviews. I recall my meeting Miriam Raftery, the editor and founder of the East County Magazine at one of our regular meetings many years ago, and she would present me with a book by Jamie Reno and ask me if I would write a review of it, which I agreed to, and that book would be the very first of the moore than 400 book reviews that I would write. I would also write reviews of Richard Lederer and Ruth Leyse-Wallace, members of the SDG/EG, who are also profiled in this article.