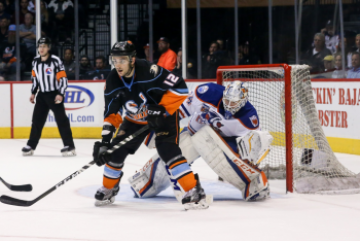 February 12, 2017 (San Diego) - The 25-13-2-2 Gulls came home tonight to face the Bakersfield Condors in the first Gulls game televised on Fox 5 San Diego as part of a partnership between the television station and the Gulls.  Read more about this here.

After a scoreless first period, the Gulls tallied first with 11 minutes left in the second on a rebound by Nick Sorensen to take a 1-0 lead.  On a power play with three minutes left, a snipe by Antoine Laganiere put the Gulls up 2-0.

The Gulls picked up where they left off in the third.  After a missed breakaway shot, Jordan Samuels-Thomas potted a juicy rebound for a 3-0 San Diego lead.  That wasn't all; at the 14 minute mark, Chris Wagner netted it five-hole to make the score 4-0 for his fifth goal in seven games and the Gulls won this one 4-0.

The Gulls stay home to take on the Iowa Wild on Valentine's Day.  Puck drop is set for 7:00 p.m.