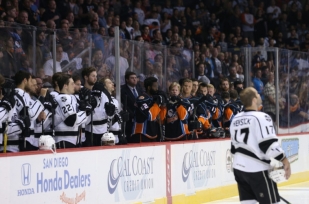 May 9, 2017 (San Diego) - Ever since the Anaheim Ducks captured the Stanley Cup to cap the 2006-07 season -- yes, it's been a full decade -- the franchise has remained among the best teams in the National Hockey League... except in one key area.

When it comes time for the Stanley Cup Playoffs, if the franchise gets extended to a final, deciding game in a postseason series, the Ducks always seem to lose (home or road). Their success rate is so low, the club is gaining a major, negative reputation for failing when both sides are facing elimination.

So when the San Diego Gulls took the ice for its final possible game in their Calder Cup first-round series against Ontario, another negative result could become a reflection upon the entire organization.

However, the farm club came through.

Nic Kerdiles established a Gulls playoff record with three first-period points (1-2=3), then the Gulls held off the Reign, 4-1, in capture the series in five games, 3-games-to-2. Goalie Jhonas Enroth stopped 37 of 38 shots to collect the victory for San Diego.

Less than 24 hours before faceoff, the Ducks sent Kerdiles home from Edmonton just for this deciding game. Good call; he was named the contest's First Star (and Star of the series if such an honor existed).

The Gulls now advance to the second round and the Pacific Division Final against the regular-season champion San Jose Barracuda. The first two contests in the best-of-7 series will beheld at SAP Center in San Jose this Friday and Saturday.

San Diego's 3-goal barrage came over an 2:37 period, but not against Reign all-star goalie Jack Campbell, who was injured in Game 4 and did not suit up for the contest.

However, back-up goalie Jeff Zatkoff also became injured during pregame warm-ups, so No. 3 goalie Jack Flinn, received the start. His only previous AHL appearance was an exhibition game against the Gills, as he spent the season in the ECHL for the Manchester (N.H.) Monarchs.

But when it became obvious Flinn was overmatch and his team trailing 3-0, the game was delayed to give Campbell time to suit up.

Kerdiles opened the barrage with a power play goal ay 9:03. Keaton Thompson tallied at 10:01, then Kevin Roy, who assisted on the Kerdiles goal, netted his own marker at 11:40.

The final two periods belonged to Ontario, just like it did in games 3 and 4. Over the final 40 minutes of the final thee contests, the Reign held a plus-49 advantage on shots, but Enroth stooped all but one shot to gains the games Second Star.

Thus, the Ontario power play went 0-for-4 on the night to finish the series 1-for-16.