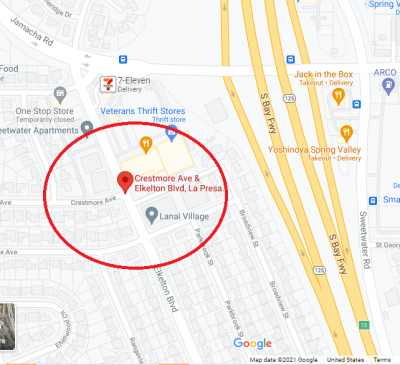 Update July 15, 2021:  On July 13, the Medical Examiner's Office conducted the autopsy and has identified the victim as Donte Anthony Lopez, 42, of San Diego. Lopez's family has been notified of his death. The preliminary cause of death is gunshot wound and the manner of death is homicide.

July 12, 2021 (La Presa/Spring Valley, Calif.) -- Law enforcement is encouraging anyone with information about a shooting last night around 11 p.m. near the intersection of Elkelton Blvd. and Crestmore Ave. in unincorporated San Diego County to come forward and speak with the Sheriff’s Homicide Unit, or, to stay anonymous, Crime Stoppers.

Sheriff’s deputies arrived July 11, 2021, around 11:15 p.m. for a reported shooting, according to Lieutenant Thomas Seiver. They found a man who had been shot. Deputies attempted lifesaving efforts until relieved by fire personnel. The man, whose identity is known to investigators, but not being released pending family notification, was pronounced deceased shortly after arriving at a local hospital.