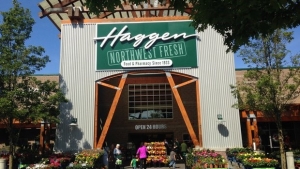 The first store making the changeover in San Diego County will be a former Albertsons in Carlsbad set to reopen March 11. Next will be two former Albertson’s stores in El Cajon, at 1608 Broadway and 13439 La Canada.

Additional stores are set for the changeover in April and May. For a full list of Haggen’s acquisitions in San Diego County and across Southern California, with timetable for opening, click here.

It’s all part of a 146-store acquisition by Haggen, which previously owned just 18 stores.  The Federal Trade Commission, as part of approving a Safeway-Albertson’s merger, required the two large chains to divest the stores now being sold including Vons stores owned by Safeway.

Haggen’s CEO Bill Shaner has described the chain as “somewhere between a Vons and a Whole Foods.”  For the past 80 years, Haggen has sourced much of its foods from local farmers, ranches, and fisheries. The stores also carry--cheers—locally brewed beers as well as artisan cheeses, breads made from scratch, and natural health products, along with offering an in-store deli, pharmacy, fair trade and organic items.

Asked if they will use local farm sources in San Diego County, Haggen spokesperson Deborah T. Pleva responded via e-mail, "Yes. We believe sourcing local, fresh products will work as well as CA, AZ, and NEV as it has in WA and OR. We have hired a CEO for the Pacific Southwest region to help us establish relationships with local farmers, ranchers and food producers in those areas. We really do believce in building the local, sustainable food economy in every state."  Local farmers or other food producers who want to contact the company directly can do so through its website at www.haggen.com, Pleva added.

"We warmly welcome these new employees," said Pleva. She added that stores will undergo interior and exterior signage changes but products will still be in the same areas

The stores being acquired by Haggen include several in East County and 25 in San Diego overall.  East County locations include four Vons stores: two in La Mesa on Lake Murray Blvd. and on Avocado, as well as two in El Cajon on Fletcher Parkway and Camino Canada. Haggen is also acquiring the Albertsons store in El Cajon on Broadway and in Santee on Magnolia.  In San Diego’s inland region, Albertsons stores on Tierrasanta Blvd. in Tierrasanta, Pomerado Road in Poway and Rancho Bernardo Road in Rancho Bernardo are also being sold to  Haggen.