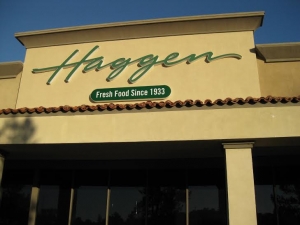 November 19, 2015 (San Diego’s East County) - Over the weekend of November 15th, the Haggen supermarket at 3681 Avocado Boulevard finally ran out of food and other salable items and closed for good. The store, located in the Rancho San Diego Village strip mall, was originally a Vons before Haggen bought the chain out in Southern California and then subsequently declared bankruptcy. Over the month of October the store slowly began winding down operations by not taking in new stock, selling off the food and sundries, and gradually barricading the empty aisles off as the food ran out.

This situation mirrored the closure of the nearby Family Foods supermarket in the Sweetwater Village shopping center (corner of Austin Drive and Sweetwater Springs Blvd.) during 2008. That store has remained closed since. 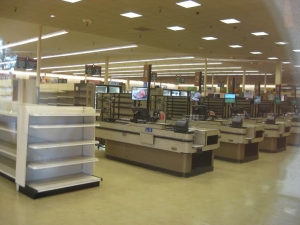 I went to the Rancho San Diego Village on the afternoon of November 15th. I found the store locked up and empty, with all the internal lights on, including the advertising monitors in the checkout lanes. At this time the RSDV mall has the empty Haggen store, a freestanding Citibank branch that was closed, and a freestanding former restaurant and American Automobile Association branch that is up for rent, though it has been rented out as a seasonal Halloween store in the last two years.

Luckily for the owner of the mall, the Smart & Final chain of supermarkets decided to buy up a large number of stores in San Diego County and the Avocado Haggen will become one of their operating stores, possibly by mid-December.

In the East County, Smart and Final also purchased two of Haggen’s stores in El Cajon (one on Fletcher Parkway, the other on Camino Canada) and one in Santee, on Magnolia Avenue. The competing Gelson’s Markets chain purchased the Haggen stores in Del  Mar and La Jolla and thus most of the Haggen supermarkets are now in other hands within San Diego County. Time will tell if they suffer the same fate.