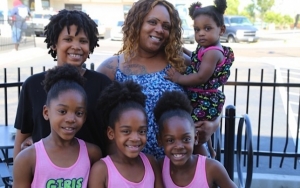 April 6, 2015 (San Diego)--Doors were being shut on Deann Todd and her five children, and she was running out of places to turn.

One unexpected twist in a relationship threatened everything she had worked for and left her unemployed and her family without a place to call home. The situation was turning desperate until she came across Home Start, a discovery that has turned everything around for her struggling family.

Home Start is non-profit child abuse prevention and treatment agency funded in part by the County of San Diego’s Health and Human Services Agency and First 5 San Diego.  Home Start aims to prevent child abuse by addressing conditions that contribute to risky and abusive situations such as poverty, lack of affordable housing, unemployment and unsafe neighborhoods.

“They (Home Start) are like angels,” said Todd. “They’re more than angels actually. I don’t know how to describe them.

“I went to so many different homeless shelters and they all said ‘no,’ and if Home Start hadn’t taken us in we would have been on the concrete somewhere.”

Instead, Todd and her children – an 11-year-old son, 7-year-old triplets and a 1-year-old daughter – have an apartment, she has two jobs and goes to school, and the family is in the process of transitioning off public assistance.

It’s a big change from where they were several months ago.

Todd had started dating a man who turned out to have a dark side he kept hidden from her. That led to her eviction from the condo where she and her children had been living for nearly two years.

“I let someone move into my place and they just weren’t a very good person,” she said. “I was working and going to school and I had no idea he was being watched by law enforcement or the other lifestyle he had.

“It was total shock and surprise when all that happened – it was a major blow.”

The homeowner’s association where she was living told her she was a good tenant, but her lease wouldn’t be renewed and gave the family 60 days to move because of the police involvement caused by the guy she was dating.

That started a spiral of incidents in which Todd and her children would run into one obstacle after another in search of a place to call home. Stays with relatives didn’t work out. Shelters were full. At one point, she told a residential treatment program she smoked weed and drank liquor just so they could stay there.

“We were going all over everywhere when my cousin found the Home Start program,” she said.

She went to an orientation for Home Start and they decided she would be a good candidate for the program.

After a few more turns for the worse, Home Start was able to start paying for hotel vouchers, which allowed Todd to start saving up some money for basic necessities and prepare to get a place.

“I found a landlord that would rent to me despite my evictions,” she said.

As soon as she found him, Home Start expedited the process and helped pay Todd’s deposit and first month’s rent.

At that time she was working part-time in a hair salon shampooing and doing other small services. It was a job, but it didn’t pay much.

But it’s almost as if finally getting a place to call home was the magic touch the helped everything else to fall into place.

“As soon as I moved into our new place, I found a job,” she said. “I was able to settle down, settle in and focus.

“My kids were stressed out before, too. Their grades were horrible. They were not doing well at all.”

Todd said they didn’t have enough time to do homework and keep up their reading logs with the bus and trolley schedule.

Now Todd is a customer service representative at a call center and still picks up work at the hair salon when time allows. She’s been able to save up and get a car so she can get to work. The kids’ test scores went from a D to a B average.

“Instead of all being stressed out, my kids are happy again and we’re like a family again,” she said. “We are able to cook dinner and eat dinner together.

“We have peace of mind. We’re safe, we’re secure.  When no one else would help us, Home Start did and I am forever grateful.”