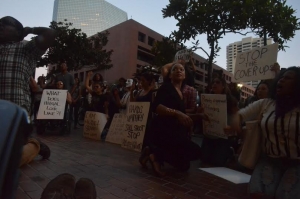 August 22, 2014 (San Diego)--Members of the community, including a coalition of Occupy groups, came to Balboa Park for an evening in support of people in Ferguson, Missouri after the police shooting of unarmed teen Michael Brown there prompted outrage nationwide. 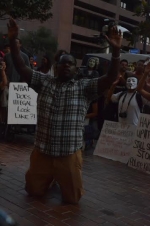 Among those present at San Diego’s protest was Manny Aguilar, who was first a member of Occupy Los Angeles, but is now here in San Diego. He told two stories that reflect the distrust with law enforcement. According to Aguilar, the San Diego Sheriff’s office asks immigrants of the Latino community for their green card. This is part of the Safe Communities Program where local law enforcement does some immigration enforcement for U.S. Immigration and Customs Enforcement. The County is no longer part of the program due to liabilities involved.

The second story involves U.S. Border Patrol agents shooting people as they are going back to Mexico. CNN reports that Elena Rodriguez, a 16-year-old, was gunned down, her body was found in a pool of blood on the Mexican side of the border.

Aguilar also mentioned that tensions with the Los Angeles Police Department (LAPD), also continue due to similar situations to what happened in Ferguson, Missouri. He told ECM about Ezell Ford, whom many believe was executed.

“I’m convinced due to the results of my initial investigation that this is not a justifiable homicide, this is in fact an execution,” attorney Steven Lerman said in an interview.”

Aguilar is a human rights activists as well. 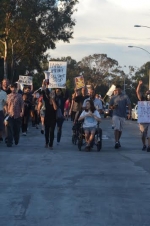 The second person ECM talked to was Luke Boyett, who told ECM that there are tensions between the minority communities and the police. He said that people are coming to demonstrate since “the police have the law on their side, and they are able to shoot people,” even when they should not.

For example, if a person does not have a weapon, the police do not have a right to use deadly force. This is why they “were given Taser guns so they would not have to shoot people [by using] real guns,” he said.

He is concerned that officers feel they can do what they want. We discussed a clear tension between the police and minorities. What happened in Ferguson, Missouri is not that uncommon, he said, adding, “It’s not fair that police think they can do whatever they want.”

The community in attendance was mixed racially, with whites carrying signs telling us that black lives matter. The theme kept to the “hands up, don’t shoot” which started in Missouri after Michael Brown reportedly had his hands up to surrender when he was shot.  It has since spread nationwide. All the activists want is the end of police brutality and the structural racism they say that they live with every day, in their communities.

Jacquelyn Phillips, the organizer, read the list of people shot by police, after the march arrived at the Hall of Justice on Broadway. The list included familiar names, such as Oscar Grant, shot in Oakland, and of course, Michael Brown. The names were of people killed for either having a mental issue or accused of committing petty crime. None were armed. All were from a minority community.

As the meeting broke, the organizer, Phillips, asked the people to turn to the person next to them and simply tell them, “Your life has value.”