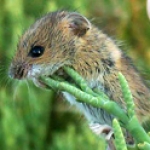 Infected rodents in the wild rarely pose danger to humans. Only one human case has been found in San Diego County (a non-fatal case in 2004). However, people can inhale hantavirus by stirring up rodent droppings. There is no treatment, vaccine or cure for hantavirus infections, which are deadly in 38 percent of cases. You can, however, reduce your risk of hantavirus by following the tips below.

“People should never sweep up or vacuum rodent droppings or nesting material,” said Jack Miller, director of the County Department of Environmental Health. “Instead, they should ventilate closed areas for at least 30 minutes, and then carefully use bleach or a full-strength disinfectant before removing them.”

The best way to prevent the disease is to keep mice out of houses, garages and sheds by sealing holes larger than the size of a dime, County officials said.

Hantavirus can cause hantavirus pulmonary syndrome (HPS) which starts with flu-like symptoms but can grow into severe breathing difficulties or even death.

A total of 37 rodents have tested positive for hantavirus in San Diego County this year, up from 21 in 2010.  Additional deer mice from Carlsbad and Escondido also tested positive in the most recent tests, as well as harvest mice from Oceanside and Carlsbad.

For more information, contact the county Department of Environmental Health at (858)694-2888 or visit http://www.sdcounty.ca.gov/deh/pests/hantavirus/html.