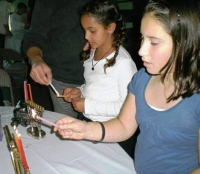 December 17, 2009 (San Diego) – In celebration of Hanukkah, San Diego Jewish Academy kindergarten through fifth grade students lit the menorah, ate potato pancakes and learned about Hanukkah in Israel and Israeli culture. The third-grade choir, Kol Tikvot, took singing voices on the road as they visited Seacrest Retirement Home and Jewish Family Services and brought their joy of Jewish music to the elderly community during the Hanukkah season.

Students also sampled donuts (sufganiyot- eaten during Hanukkah as they are also cooked in oil and serve a reminder of the temple oil that lasted eight days) as well as treats and playful gifts. 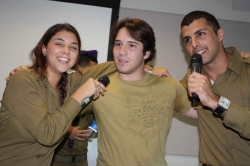 Upper School students teamed up for Hanukkah this year with Toys for Tots, an organization that collects toys for underprivileged children during the holiday season. Students collected new, unopened toys between December 14th and 18th. SDJA’s Associated Student Body added more spirit to the campus by creating Hanukkah activities including a donut-eating contest, a driedel spin-off, and a classroom door-decorating competition.

A highlight of Hanukkah took place on Monday December 14 when Friends of the Israeli Defense Forces (FIDF) Musical Ensemble performed for K – 12 students.

On Tuesday February 2, San Diego Jewish Academy will open its doors to the community and display its offerings at its annual K-12 Open House.

For information on San Diego Jewish academy, which has students from kindergarten through 12th grade, visit www.sdja.com or contact Renee Sherman, Admissions Director, at rsherman@sdja.com or 858-704-3716.

It's really a great fun for the teen age students,these things relies them the beauty of the life.Thanks for such a great post.
avoimet työpaikat

I am very pleasure to find this post. I was searching some days ago on this topic. I found it there. Thanks for sharing this post. If anyone have more information about this then please to share. I will come back soon.
site analytics

This is very healthy activity for students and teachers also.HANUKKAH done such a nice work for students keep it up HANUKKAH.
dallmeier