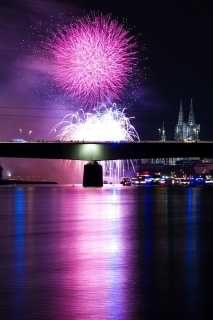 January 1, 2017 (San Diego) -- Around the world, people celebrated the end of a tumultuous 2016 and the arrival of a New Year. Here are some highlights worldwide, across the U.S., and here in San Diego County.

President-elect Donald Trump held his annual New Year’s bash at his Mar-a-Lago club in Florida, where he said his New Year’s resolutions is –no surprise here – to “Make America great again.”

Earlier in the day,  Trump tweeted a provocative New Year’s message saying he wished everyone -- even his “many enemies” a happy New Year.

Fireworks lit up the skies as major cities around the world rang in the new year, from London, England to Sydney Australia.

But the New Year started on a somber note in Istanbul, Turkey, where a terrorist attack by a gunman at a nightclub killed dozens of revelers an hour after midnight.

On New Year’s Eve morning, actor William Christopher, best known for his role as Father Mulcahy on the TV show “M*A*S*H,” became the last of many beloved celebrities to pass on in 2016.

In Southern California, there’s good news for skiers-a winter storm dropped nearly a foot of snow at Big Bear.  By New Year’s Day, two inches of snow had fallen on Palomar Mountain and on Mount Laguna in East County. The storm also doused Pine Hills near Julian with three inches of rain, bringing two inches of rainfall or more to many other local mountain communities.

In San Diego, a pair of twins gave their parents a New Year’s surprise, born in separate years shortly before and after midnight.

Mara Elliott, newly elected city attorney, says her resolution is to “help foster a meaningful regional approach to homelessness” that includes the county and cities within the county, adding, “Together we must act on our humanity, united as one region.”

Capping off New Year’s Day, the Chargers lost to the Kansas City Chiefs in a bittersweet season end for fans at Qualcomm Stadium, where this may have been the Chargers’ last game ever as San Diego’s hometown team.