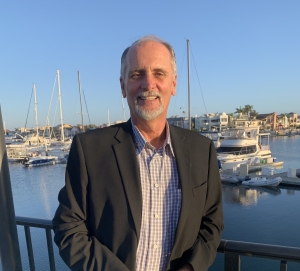 Brown, CEO of the East County Transitional Living Center (ECTLC), will be honored at a luncheon from noon to 2:30 p.m., Monday, Feb. 10 at the Ronald Reagan Community Center, 195 East Douglas Ave., El Cajon. The public is invited to attend. Admission is $25 per person and lunch is included. Tickets are available online at www.EastCountyChamber.org under “Events,” or by calling (619) 440-6161.

Brown will be honored for his community involvement, including support to several nonprofits and charitable volunteer work.

“This award is a huge honor and I’m very grateful and humbled by it,” he said.

Brown is best known in the community for his leadership at ECTLC, a faith-based community services nonprofit serving low-income and homeless individuals and families seeking shelter, security and healing, as well as others needing recovery from drug and alcohol addiction and unhealthy and broken relationships. More than 400 men, women and children are served daily at ECTLC.

“Harold is very deserving of this award,” said Joe Mackey, chair, Citizen of the Year Committee. “Our culture seems dominated by division, anger, negativity, depression, unkindness, fear, remorse, guilt, rejection, loneliness and hopelessness. When people hit rock bottom and admit they need help, Harold and the East County Transitional Living Center staff are there to outshine the darkness and provide hospitality, healing and an open door of opportunity. ECTLC is the transformation choice so that people can refocus and dream new dreams for their lives.”

Since 2009, ECTLC has operated a converted hotel on East Main Street in El Cajon as an emergency temporary shelter to homeless families, as well as people needing transitional housing. The hotel has 101 rooms, some of them are assigned for maximum 28-day stays for people once living on the street. Other rooms are allocated for families so they can avoid living in their cars or on relatives’ floors while they save money for deposits and first-and-last-month’s rent and use the extra time to transition into self-sustained, independent living.

“We offer a place where hurting people in pain can find the hope and forgiveness they need to give life another chance,” said Brown, an ordained Southern Baptist pastor. “Sometimes it takes a storm in life to lead people to be receptive to accepting help and choosing to make progress.”

Brown is deeply committed to helping homeless individuals and families. That’s because he was once homeless himself.

Born in Portchester, N.Y. in 1957, Brown moved to Florida at age 12. He graduated from high school in 1974 and joined the U.S. Army in 1980. After his honorable discharge following four years of service, Brown returned to Florida where he worked as a plumber, but the battles with alcohol and drug abuse continued.

“At one time, I lived in my car and on the streets,” said Brown. “It was a tough and painful time in my life. But, pain can make you humble, sympathetic and sensitive to others. Today, I’m grateful for the opportunity to recycle my pain as a ministry to help others.”

In 1988, Brown drifted from Florida and arrived in San Diego, where he found shelter at Father Joe’s Villages in Downtown San Diego. He worked for a year as a pipe fitter at National Steel and Shipbuilding Company, commonly referred to as NASSCO, but he continued to struggle with substance abuse.

In 1989, Brown entered the San Diego Rescue Mission and found help for his addictions. “There comes a time in your life when your best choice is to swallow your pride, admit your weaknesses, accept the truth and make the commitment to change that lead to recovery and transformation,” he said. “I give the credit to God.”

While living at the Rescue Mission at 11th Avenue and J Street, he began working there in a facilities job. He help build the Rachel Grosvenor Family Center for Women and Children, a 42,000-square-foot, 130-bed shelter for single mothers and their children, which opened in 1992 in Barrio Logan at 16th Street and National Avenue. He eventually became director of facilities at the Rescue Mission.

In 1994, he moved out of the Rescue Mission and purchased his first home using his veterans benefits. In 1995, he married wife Jacky. They have four children.

He continued working at the Rescue Mission until 2001, when he accepted a job as a property manager with the Hamman Companies, an El Cajon-based construction and property management firm. In the same year, he joined the staff of the Set Free Baptist Fellowship Church of El Cajon.

In 2003, the Hamman Companies purchased the abandoned Fabulous 7 Motel in El Cajon and remodeling began. The property was operated initially as a hotel and later as a temporary shelter. In 2008, the El Cajon City Council approved a conditional use permit for the property to be operated as ECTLC, which became a nonprofit in early 2009.

In addition to ECTLC, Brown today serves as senior pastor of Christian Fellowship of El Cajon. He also is a member of the East County Homeless Taskforce Steering Committee, El Cajon Rotary Club, Lions Clubs Pathfinders and East County Posse, a philanthropic group. He also is on the board of the San Diego Leadership Forum, a group that provides leadership training and counseling for Christian leaders.