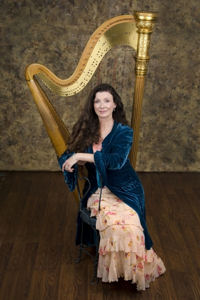 July 30, 2012 (El Cajon) -- Singer and harpist Mair Rathburn brings her musical fun in vintage costume to the El Cajon Library, 201 E. Douglas Av, in a family friendly concert Sunday, August 12, at 2 p.m. The free concert is part of the San Diego County Library Acoustic Showcase series, and is sponsored by the Friends of the El Cajon Library.
Rathburn is a historical interpreter at the Cosmopolitan Hotel in San Diego's Old Town State Park, so it piqued her interest when, at a previous Acoustic Showcase concert, she saw the library's mural depicting the history of El Cajon.  As the year 2012 celebrates the Centennial of the City of El Cajon, Rathburn was inspired to return to the library with a musical, historical version of the mural.
Those attending the concert will hear stories about life in El Cajon from the days of the Kumeyaay up to the 1870s, as Mair brings the library mural to life with songs like Oh Susanna, Turkey in the Straw, Cielito Lindo, Aura Lee, Red River Valley, Shenandoah, and many more.  Children and families are welcome, and vintage attire is encouraged.
Rathburn has a Bachelor of Arts degree in Music with an emphasis in voice, and is in constant demand as a vocalist. She was a featured vocalist with San Francisco Civic Chorale and was a vocal soloist with the Golden Gate Park Band. Her "Christmas with the Harp" instrumental CD has been in regular rotation on Muzak, XM, JMX and Sirius music services and her CDs are heard on EWTN Radio.
This concert is the latest in the San Diego County Library's national award-winning Acoustic Showcase series, which has been bringing free local music to San Diegans of all ages since 2010.  The Acoustic Showcase performances are sponsored by Friends of the Library groups throughout San Diego County.