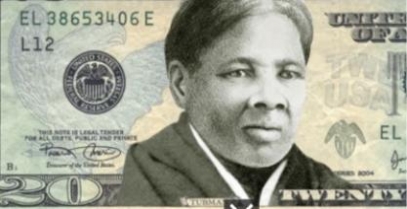 April 20, 2016 (Washington D.C.) – A woman’s place is on the money. That was the slogan of “Women on 20s,” a group that launched a national effort to put a woman’s face on our twenty dollar bills.  The group held a national vote, with abolitionist leader Harriet Tubman named their number one choice.

But the arguments to remove Jackson proved compelling, with advocates citing his record of ordering genocide against Native Americans including the Cherokee Trail of Tears. Meanwhile Hamilton enjoyed a boost in popularity after the Broadway musical, Hamilton, won critical acclaim.

In the end, the Treasury Department came up with a lofty compromise – adding Tubman to the front of the $20 bill, while keeping Hamilton on the $10. In addition, the back side of the $10 bill will now have the faces of suffragist leaders who helped win the right for women to vote.

Harriet Tubman has been called the Moses of her time. An escaped slave born in the 1820s, she became a leading abolitionist before the Civil War, risking her freedom to return to the south 19 times to rescue slaves via the Underground Railroad, a network of secret safe houses on their journey to freedom in the North.   Later, she served as a scout and spy for the Union Army.

In her childhood, she saw her father freed and many of her brothers and sisters sold off.  At 13, she refused to help restrain an escaped slave who had been captured, and suffered a blow to the head that left her with seizures the rest of her life.  She fled in 1848 and soon came back to rescue her own family and others, never losing a single passenger on the road to freedom.  Also a gifted healer, she helped nurse those who were wounded.

After the war, she advocated for freed slaves to received an education and own property, also joining the fight for women’s equality and the right to vote.  Called “General Tubman” by her admirers, she was laid to rest with full military honors as one of the first African American women to serve in the military.