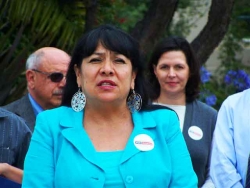 Most Local Hate Crimes Are Committed by Youths Under 21

United for a Hate Free San Diego, a coalition of faith and community leaders, presents the 2nd annual Hate Crimes Summit on Thursday Oct. 1 from 6-8 p.m. at the Ronald Reagan Community Center, 195 E. Douglas Ave, in El Cajon. A series of violent, hate-motivated incidents in East County and elsewhere in San Diego County have prompted community leaders to take action on in hopes of raising awareness and preventing future violence.

In our region, most hate crimes are committed by minors under the age of 21, according to the coalition's website,  highlighting the need for better education and intervention programs to prevent such violence.  In some cases, crimes were not reported or prosecuted as hate crimes, instead being labeled gang violence or other offenses by law enforcement although victims were taunted with racial, ethnic or gender-based slurs prior to physical attacks.

Whether to file charges for hate crimes is a decision made by the District Attorney, however law enforcement can issue recommendations based on an investigation.

Those who engage in hate-motivated behaviors denigrate our democratic way of life, our heritage and the strength that comprises the foundation of our community and our Nation,” the coalition’s website states.

James McElroy, Southern Poverty Law Center, will be the keynote speaker for the event. SPLC is the primary national organization which tracks hate crimes and hate groups. McElroy, in a recent appearance in East County, said hate crimes are increasing nationally and that several hate groups are active in East County. Other panelists will include representatives from the Sheriff's and District Attorney's offices.

A hate crime is defined as a crime based on the victim's real or perceived race, ethnicity, religion, sexual orientation, or age.  Accurate reporting is needed to document whether hate crimes are rising and to identify areas where outreach or beefed-up enforcement efforts may be needed, organizers of the Summit believe.

“We cannot be silent anymore,” Estela de Los Rios from the Center for Social Advocacy told East County Magazine. She cites concern for the safety of youths in East County, noting several violent attacks on minority high school students, including a Latino student who lost an eye after being shot at close range by a b.b. gun fired by an alleged member of a white supremacist gang. An African American student was beaten severely enough to require reconstructive surgery. Targets of hate-related assaults in our region have also included gay and lesbian individuals, Muslims and Jews.  Swastikas and other hate-related graffiti have been sprayed on vehicles and buildings, creating a climate of intimidation.

Hate-related attacks have occurred on campus and at private parties, as well as on the streets of East County. Some cases are not reported, due to concerns over retaliation, leaving victims living in fear, added de Los Rios, who recalls suffering taunts and rocks thrown at her as a child.

The event is free. Advanced registration is required. For more information or to RSVP, visit Crystal at the Center for Social Advocacy, 619-444-5700 ex. 310 or email UnitedForAHateFreeSanDiego@gmail.com. For additional information, visit http://hatefreesandiego.org.