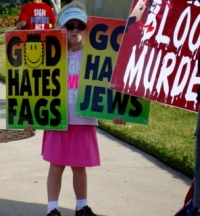 October 21, 2009 (San Diego) - Members of the Westboro Baptist Church picketed outside local schools during the past week, bearing messages of hate directed towards Jews, gays, and the military. Designated a hate group by the Southern Poverty Law Center, Westboro has gained notoriety for indoctrinating children into a cult-like web of hate (photo, left, child displays hate messages).

In San Diego, however, a handful of Westboro protesters were vastly outnumbered by hundreds of counter-protesters bearing messages of tolerance and peace; no local residents joined the protesters, according to news reports. A gay rights group, meanwhile, invited supporters to pledge donations for every minute of the Westboro protest. 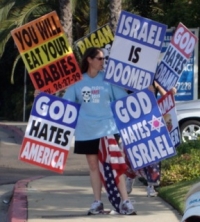 “The Phelps-A-Thon” was a huge success,” states the website Phelps-A-Thon.com/sandiego.html. “We raised over $500,” the site said, adding that organizers plan to send Phelps a card thanking him for helping them raise money for gay and lesbian equality. (Funds will be split between San Diego High School gay/straight alliance and the San Diego chapter of GLSEN.

At Beth Jacobs Congregation Orthodox synagogue in the College area, Jewish schoolchildren were exposed to signs with blatantly anti-Semitic messages, while young children wore T-shirts that read “God Hates Fags.” Adults from the Kansas-based Westboro group carried anti-American messages such as “America is Doomed” as well as messages stating the Jesus killed Jews and “You will eat your babies,” a message as inexplicable as it is grisly.

“Their parents put them into a hatred of everything; they cannot see things fairly when they grow up,” Elizabeth Choy wrote in a letter to East County Magazine. “The parents in San Diego should take this opportunity to teach their children to accept different opinions whether they support it or not.”

Some targeted organizations sought to keep a low profile, believing that giving Phelps further publicity would only encourage him to plan more protests. But others opted to react by staging counter-protests to negate the group’s hate-drenched messages.

The group targeted primarily Jewish schools and organizations. But at San Diego High School, many did just that. A handful of Westboro protesters were drowned out by hundreds who staged a peaceful protest, chanting messages of love and tolerance. Westboro had targeted San Diego High School because the group claimed the school’s policies promote homosexuality.

A similar scenario occurred outside the Rock Church in Point Loma, where a CNN reporter shot video of protesters and counter-protesters.

Benhamin found the groups use of “brainwashed children” disturbing. But he concluded, “I hope one day the kids in Morrow’s film grow up to discover for themselves that they were victims of a twisted brainwashing cult and that the messages on their posters were a mistake…a big mistake.”

The picture of the little girl in the pink skirt holding the hatred signs just breaks my heart. Those adults in charge and her parents have utterly failed her.

It is really sad that even young people like the child on the photo who doesn't even know what she is fighting for are forcefully being work and holding that haters signs is just that to painful to see but we can do anything because the parents are the one who should not let their child have the same problems of an adult. We should not let our children go through this kind of situation in early age because they also have the right to be protected by this kind of adult problems. Guy Riordan