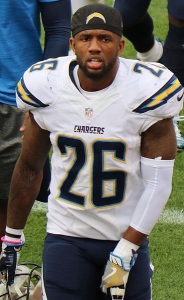 Photo via Denverjeffrey on Wikipedia

December 20, 2016 (San Diego) - San Diego Chargers cornerback Casey Hayward is headed to the Pro Bowl for the first time in his career. The NFL’s annual all-star game will be played in Camping World Stadium in Orlando, Florida on January 29, 2017.

Hayward dedicated this season in his mom’s honor, and emerged as one of the game’s top corners. Hayward set a new career high and leads the NFL with seven interceptions. They are the most by a Chargers defender since 2011.  Not only does he lead the NFL in interceptions, he is officially tied with Brent Grimes for the most passes defensed (19). The Chargers credit him with 21 passes broken up based on coaches film review.  The fifth-year veteran is also on pace to set a new career-high in tackles as he is three shy of his personal best (55) with two games remaining.