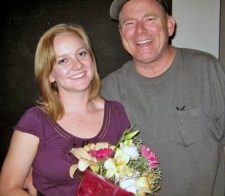 But speed proved deadly in a head-on collision yesterday, when a red Mustang driven by Bellati crossed the center line and killed David Norman Reid, 50.  The collision also seriously injured Bellati and two other teens, both students at Steele Canyon.

“CHP reported when I was there that the speedometer was frozen at 80 mph,” Leonard Villareal, public information officer for San Miguel Fire Department told East County Magazine. “The red car crossed the double-yellow lines to pass and hit the other vehicle head-on. Another car swerved out of the way first and avoided being the head-on.”

The Dodge Caravan mini-van driven by Reid spun around after it was struck and became partially wrapped around a tree. San Miguel firefighters used specialized cutting tools to remove Reid’s son, 17, who suffered major injuries. Mercy Air also responded and tried to stabilize Reid, who was trapped in the wreckage. After 45 minutes, despite CPR attempts, Reid, a resident of Spring Valley, was pronounced dead at the scene.

Bellati and a 16-year-old female passenger also suffered major injuries. NBC TV reports that she was his girlfriend and played on the school’s basketball team. A star pitcher on the high school baseball team, Bellati graduated in 2009 and was drafted by the Tampa Bay’s rookie team in the Gulf Coast League. According to ESPN, his fast ball has been clocked at 88 miles per hour. A major league baseball scouting site ranked him third in fastball speeds in 2009, with a top-end velocity of 87 mph.

The accident occurred at about 4:30 p.m. at Highway 94 and Campo Road, just west of Steele Canyon High School. Highway 94 was shut down for several hours during the attempted rescue and a CHP investigation of the scene. The three teens were taken to hospitals by ambulance.

There was no indication of drugs, alcohol or racing, according to the CHP. There is no word yet on whether charges will be filed against Bellati.

Reid often volunteered to help on his kids’ drama productions at the school, the Union-Tribune reported. “He’s easily one of the nicest guys you could meet. He always had a good joke or story. “He was there any time we had an event going on, a production or a show. They were always helping out,” said principal Jeff Kover.

“No one’s immortal. Everyone thinks they are,” Villareal said when asked what lesson teen drivers should learn from the tragedy. “In the fraction of a second, life’s changed for two families.”