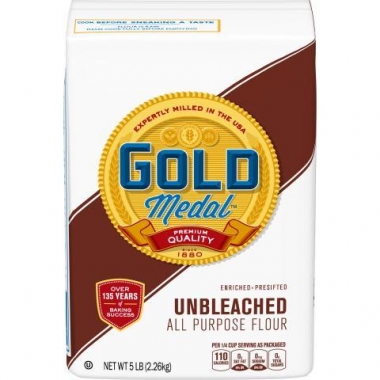 East County News Service
September 23, 2019 (San Diego) – An e-Coli outbreak has been traced to Gold Medal unbleached flour, the U.S. Food and Drug Administration warns. General Mills has recall the 5-pound bags, which have a use-by date of September 6, 2020 and UPC code 016000 196100.
Check your pantry and flour cannisters and if have any Gold Medal unbleached flour, throw it away, or return it to the store for a refund if you still have a receipt and packaging.  General Mills asks consumers who purchased the unbleached flour affected to call their customer relations team at 800-230-8103.
This strain of e-Coli is more severe than more and causes not only infection, but also release toxins into the body, according to health officials at Johns Hopkins Medical Center.  This can cause abdominal pain, bloody diarrhea, kidney damage or even death in extreme cases.
There have been several recalls recently of various brands of flour and products containing flour, including a recall of Trusted Source flour earlier this year that sickened 21 people.
The flour may have been contaminated from wheat crops exposed to bacteria, such as in fecal matter from animals in the field.  Flour is not customarily treated to kill bacteria when harvested or milled, since traditionally the risk has been low.
The FDA now advises that consumers avoid eating any raw flour, such as in cookie dough, and wash your hands after baking any foods made with flour. Even though cooking at high heat can kill the bacteria, health officials recommend not doing so to avoid risks of handling or eating undercooked food that is contaminated.
The risk is especially high for older adults, young children and people with compromised immune systems.
Prompt treatment is important, which may include antibiotics and IV fluids, or even dialysis to remove the toxin from the kidneys and blood, if kidney damage has occurred.
The current recall affects only Gold Medal unbleached flour in 5-pound bags with that September 6th, 2020 expiration date.  The e-coli was found during routine inspecting and other Gold Medal flour products are believed safe, according to the company.
If you have any questions, you can call General Mills at 1-800-230-8103.
If you become ill with e-coli symptoms after consuming Gold Medal Flour, notify the FDA at 1-888-463-6332 and contact your doctor immediately.