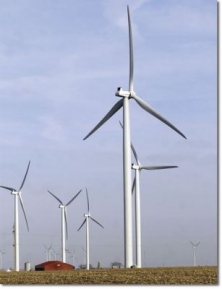 In Wisconsin, the Brown County Board of Health this week voted to declare Duke Energy’s Shirley Wind energy project a human health hazard to residents, visitors, workers and other people  up to six miles away from the wind turbines. Here in San Diego’s East County and neighboring Imperial County, wind turbines have been built within a half mile of homes and new setbacks proposed remain much less than six miles, raising questions over potential dangers to residents if those projects are built.

In Vermont, a federal district court has found that plaintiffs provided ample evidence to allow a private nuisance claim over the Sheffield Wind Project to proceed in court for creating unreasonable noise.

Plaintiffs allege that the Vermont wind turbines have caused pain, stress, suffering and loss of property for residents, also preventing them from gardening, walking or dining outdoors. The court denied a motion by defendants who had sought to dismiss the nuisance claim.

The Wisconsin board based its decision to declare a wind project a health hazard on a year-long study of infrasound/low frequency noise in the area. Health hazard is defined by the board as as capable of causing “acute or chronic illness or death” if not abated. A doctor described symptoms among patients near the wind facility as “devastating” including ear pressure , pain, tinnitus, vertigo, headache, nausea, chest pain pressure, abdominal pain, sleep disruption and depression; several residents have abandoned their homes.

The Wisconsin wind project could be ordered torn down unless the developer can prove that its turbines are not what is causing the health problems experienced by neighbors.

For more information on the Brown County, Wisconsin Board of Health decision and related background information, visit http://waubrafoundation.org.au/2014/duke-energys-shirley-wisconsin-wind-development-hazard-human-health-declares-brown-county-board-health/

On the one hand, this has always seemed to me the weakest critique of wind power. On the other, I'd be thrilled with almost any setback to wind farm development, even one based on bogus claims.