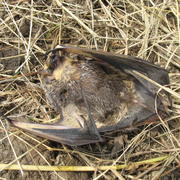 By Jonathan Goetz
Photo Source: U.S. Geological Survey (dead bat)
“Park visitors who had no physical contact with the bat are not at risk for rabies.” – County of San Diego Communications Office
Escondido (September 9, 2020) - A woman visiting the Safari Park in Escondido on Sunday, September 6, feared to have been exposed to rabies by a wild bat, has been located, according to County News Center.  But park officials warn any other visitors who may have had contact with the bat to come forward.
Those exposed to a wild bat, like the one found shortly before noon around Mombasa Cooker at Nairobi Village Sunday at the San Diego Zoo’s Safari Park, should consult a doctor to determine if vaccination is appropriate. Rabies vaccination in humans, despite being called a “vaccine,” is typically administered post-exposure. However, time is of the essence, because symptoms often don’t surface until two weeks after exposure, and if left untreated, rabies is fatal.
“We are concerned about the health of this woman and any park patrons who were in direct contact with the bat,” said Eric McDonald, M.D., M.P.H., medical director of the County of San Diego Epidemiology and Immunization Services branch, according to County News Center. “We want to make sure they were not potentially exposed to this deadly disease.”
According to the United States Center for Disease Control and Prevention’s (CDC) related Vaccine Information Statement (VIS) on the virus, “Rabies vaccine is given to people at high risk of rabies to protect them if they are exposed.
“Human rabies is rare in the United States. Wild animals like bats, raccoons, skunks, and foxes are the most common source of human rabies infection in the United States.
“Rabies is more common in other parts of the world where dogs still carry rabies. Most rabies deaths in people around the world are caused by bites from unvaccinated dogs.”
County News Center advises further, “Health officials would like to interview anyone who may have come in contact with the bat as soon as possible to determine if they were potentially exposed to rabies. Park visitors who had no physical contact with the bat are not at risk for rabies.”

Did someone pick up the bat?  How was contact made?