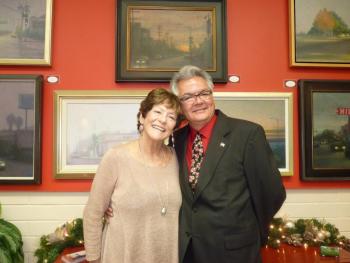 December 11, 2014 (La Mesa)—It’s beginning to look a lot like Christmas in La Mesa’s downtown village, where holiday lights are twinkling and festivities are set to begin for the 25th annual Christmas in the Village celebration on Friday and Saturday, December 12 and 13.

East County Magazine sat down for an interview with John Vigil, self-proclaimed “Chief Elf” from the La Mesa Village Merchants Association and Shannon O’Dunn, owner of O’Dunn Fine Art, for a sneak preview of this year’s event—and why it’s especially important this year for local merchants to have a strong community turn-out.

The city known as the “Jewel of the Hills” will shine brightly with thousands of holiday lights and specially made bonfires.  Presented by California Coast Credit Union, the two-day event kicks off each night at 4:30 p.m., with a Salute to America tribute honoring Vietnam veterans.

“It’s the 50th anniversary of the Vietnam War,” said John Vigil, La Mesa Village Merchants Association (LMVMA) executive director. “This is a way for us to commemorate and recognize these veterans and their families for the sacrifices they made.”

In addition to the parade at 5 p.m. each night, festivities include:

Each year, the LMVMA also supports a local non-profit.  This season the Salvation Army Ray and Joan Kroc Center’s Angel Tree Toy Program has been selected.  Bring an unwrapped toy, gift card or food donation to the event.

Christmas in the Village runs from 5 p.m. – 10 p.m. each night.  For more information you can go online at www.lmvma.com.