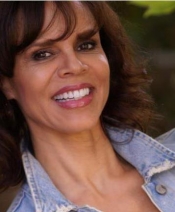 Her writing credits include Magnum P.I. , The Pretender and AIrwolf.   She  made her directorial debut with Cora Unashamed for the BBC, PBS and Masterpiece Theatre's The American Collection. Pratt is a five-time Emmy nominee, a Golden Globe nominee, and recipient of The Lillian Gish Award from Women in Film, The Angel Award, The Golden Block Award, and Six B.E.N. Awards.

I just read Deborah's book review and listened to her East County Magazine Live interview with Reyna Menasche, which I very much enjoyed. Deborah's reference to her research for the Vision Quest made me smile since I work in a biomedical company focused on genetic research for my day job. It is mind boggling what our scientists can do these days, isn't it? And it is a skill and art to weave that kind of knowledge into a novel. Deborah's books as well as her acting, directing and producing experiences are fascinating. The January 13, 2017 press release on DWW on her website is encouraging. We need more female directors, more inspiration and more heart on the big screens. I look forward to Deborah's upcoming projects and books. Seems one never quite knows what will come next? Mollie Moon, author of Five Wishes - molliemoon.com