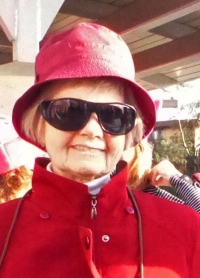 “It wasn’t the e-mails; it was the white males,” – Bonnie Price, on sexism she believed prevented Hillary Clinton from becoming president

February 18, 2017 (San Diego’s East County) – Spring Valley resident Bonnie Price is a long-time women’s rights advocate, political scientist and feminist. In January, shortly after Price marched in the historic women’s march in San Diego, we interviewed her about her concerns over the erosion of women’s  rights that she spent much of her lifetime fighting to attain.

Price has advocated for women’s causes from equal pay to the equal rights amendment.  She once established a Planned Parenthood clinic in rural Pennsylvania. She’s also been active in recruiting women  to run for political office through the nonpartisan Run Women Run and has served as president of the East County Democratic Club. A supporter of Hillary Clinton’s presidential aspirations, Price still hopes to see the ultimate glass ceiling broken in her lifetime.

Scroll down to read highlights of her commetns , or click the audio link to hear our full interview.

Price notes that Clinton won 3 million more popular votes than Trump, but lost due  in part to the Electoral College system that she considers archaic. But while critics blamed Clinton’s e-mail controversies,  Price declares staunchly, “It wasn’t the e-mails. It was the white males!”

She elaborates, “We have institutionalized sexism,” adding that most representatives in Congress are men who “make rules regularly about women’s rights and they try consistently to take them away.” In many states, those rights have already been stripped away, she adds, citing access to birth control and health care decisions as examples.  Yet ironically, the same members who have worked to restrict women who don’t want to have babies from accessing birth control also voted to allow the federal government to fund Viagra for men – increasing the potential for more unwanted offspring.

She bristles at the Trump administration’s recent actions to eliminate funding of any nonprofit worldwide that even refers women to abortion providers,, action that could shut down clinics that are often the only source of women’s broader healthcare , from birth control to cancer screenings.

She denounces  male politicians who she says are often ignorant about biology or deny science. “Ignorance breeds more ignorance, and institutionalized sexism just enhances that further,” she observes.

Price notes that childbirth takes a toll on women’s bodies. After a child is born, women do most of the work caring for the growing child.  “Many of these men have no idea what goes into raising a child,” she adds. “So what we need to do is educate them and in addition, set up a bill of rights for women that includes control over their own choices for healthcare.”  She wants to see a Constitutional amendment someday, but admits it’s difficult to get one enacted; even the Equal Rights Amendment fell short of enough states ratifying it to become law.

Price once set up a Planned Parenthood in northeast Pennsylvania that was one of the largest in the U.S.  “Many of those counties were old open pit coal mines where people were out of work and jobs will never go back there. In many towns, we were the only healthcare in town. Mothers brought their children, brought their husbands, to get all kinds of family care,” she recalled.  In urban areas, workers did outreach in communities to educate people about birth control and condoms to prevent the spread of HIV/AIDS.

She objects to churches where pastors urged parishioners to vote for Donald Trump, “whom I consider a sexual predator, yet he was recommended over a woman who …worked for women’s rights, children’s rights,”  Price says.  She was appalled by Trump’s boasting, caught on tape, of grabbing women’s private parts and by his denigrating of women including even fellow Republican candidate Carly Fiorina.

One of Trump’s first actions was to take equal pay and civil rights off the White House website’s issues page. Next up,  Price fears he will appoint a swing vote on the Supreme Court to overturn Roe vs. Wade, which legalized abortion.

She recalls the era before abortion was legalized nationwide by that decision. Before, abortion was illegal in some places and legal in others, but with limits that made it difficult and costly to access.  In Pennsylvania, where she worked, a woman had to go to a hospital in Philadelphia and get three physicians and a psychiatrist to approve the procedure.  Referrals were made through a network of pastors and the procedure,  if it could be obtained, cost $800 – a great deal in the early ‘70s.

Price recalled helping a friend who had been abused by her husband and impregnated through rape.  She had become an alcoholic trying to cope with the abuse and had already given birth to four children, one of whom had fetal alcohol syndrome.  She obtained an abortion and Price recalled, “She said it was the best decision she ever made, so that she did not bring another child into this world with fetal alcohol syndrome.”

ECM host Miriam Raftery recalled women she had interviewed or known through the years with nightmarish pregnancy situations, including a teen raped by her father and forced to give birth to a child of incest, because no judge in her southern state would authorize an abortion.

Price noted that legislators who seek to take away women’s rights “often are trying to force their particular brand of religion on women who don’t share it. We’re supposed to have freedom of religion in this country.”

Beyond reproductive rights,  however, she cites California Senator Kamala Harris in her view that all issues are women’s issues –such as equal pay, an economics issue,  quality education, and maternity leave.   Price’s daughter in Britain received six months of maternity leave paid by the government.

She is also a huge advocate  for women seeking to follow their dreams.

“Women can do anything if they want to, and if they are allowed to,” she says. She recalled her graduate school years, when she was one of the only women political science majors and a professor asked “Why would a married woman want to do that?”

She encourages women to get involved politically – starting with contacting members of Congress each week on key issues recommended by the websites for the Women’s March and Indivisble. She also helps recruit pro-choice women to run for  office through Run Women Run, which is nonpartisan, and the East County Democratic Club.

“In East County last fall, only 32% of our candidates who ran or won were women,” she says. “A lot of mega churches there do not believe that women should be running for office, so we have entrenched sexism there,” she adds.

Running for office can be harder for women than men, since women candidates are often subjected to sexist comments and may be discouraged by families.  But she insists, “Women should run in spite of it.”

Progress has been made.  She recalls lobbying years ago for equality in the military, and being rebuffed by a legislator.  “I am proud to say that now women can serve in all areas of the military and they can become officers. They can fight for their country, move up the ranks to general,” she says, adding that she hopes the Trump administration "misogyny" won’t discourage women from serving their country.  “It’s your right. You should fight for it, and you should fight for your country, if that’s what you want to do,” she advises young women today.

Someday, she hopes to see the ultimate glass ceiling in America broken, with election of a woman president.  In the meantime, she offers this advice to the women of America:  “I say, `Get involved women, and do it for yourself. Do it for your daughters. Do it for your granddaughters.’”  Price concludes.

It wasn't the emails, it was white males (and females) without decent jobs that didn't favor four or eight more years of Obama's "free trade" and exporting jobs, which is why they showed up in great numbers at Trump rallies and voted for him. Real unemployment is now ten percent, many on crummy part-time jobs thanks to Obama, and job participation of the workforce is at a forty-year low. Household income is dropping. The voters don't care about male/female, black/white, they want results and so Price is as wrong to highlight gender as she might be to highlight race. Americans want decent jobs -- "It's the economy, stupid." The recent vote wasn't anti-female, it was pro-employment.

That's got to be the saddest comment I've ever heard Deserttrek! While I didn't vote for Hillary and personally find her not who I would want as our President, I applaud all women who stand their ground against an obviously primitive male dominated landscape. Your words only serve to reinforce the need to change this pathetic reality.

poor little bonnie cannot admit her bigotry and hate towards ALL those who would dare to disagree. as far as hillary, was a poor choice and if she hadn't married bill would have been the dean at an all girls college seducing the first year students. she was in bed with mohammedan terrorists, globalist and wanted to flood the country with illegal aliens and more mohammedan terror. she lost according to the Constitution, which is not archaic. back to your george soros funded fainting couch

@ Deserttrek. PLEASE, trash talk such as yours only reinforces who you are and you've properly identified yourself by your thread title. As a bigot, you will never change. Thank you for allowing us to know that you're just another HATER.