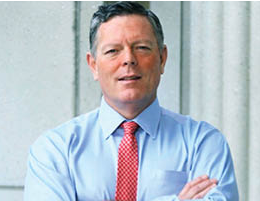 May 20, 2017 (San Diego) -- Dave Myers wants to be the new Sheriff in town.  He says he’s running to restore accountability, transparency, and community trust to policing.  He’s worked in law enforcement for 32 years and is currently a Commander with the San Diego County Sheriff’s Department.

Recently, East County Magazine sat down with Myers for an in-depth interview on our show on KNSJ radio. Hear the full broadcast by clicking the audio link above, and view highlights below.

Asked to name reforms he would implement, he says he would complete a transparent review of the department from the bottom up and create a new narrative for measuring success that restores community trust.

He recalls that 32 years ago, when his career began,  policing was viewed as for the community but today, many are suspicious of law enforcement particularly in communities of color.  “When minorities in San Diego County don’t look like the people that are policing them” that leads to a discord. “We are not doing enough right now to reach out to the minority community” to recruit more African Americans, Latinos and Asian-Americans into policing and the command structure, as well as more women.

He spoke about hate crimes against religious and racial minorities and the LGTB community.  “I have an unblemished record when it comes to implementing true crime-fighting strategies to assure everybody can live in a safe and secure community.”

Asked about the level to which the Sheriff department should cooperate with federal immigration authorities, he said he blames the federal government for failing to provide true immigration reform and instead, looking to state and local  law enforcement to enforce federal law along an international border.  “This puts local law enforcement in a very unfair position and is also unfair to the people in the communities that they are supposed to protect.”

Forcing immigrants into shadows can result in immigrants afraid to report crimes, such as an undocumented woman who was frightened to report a neighbor molesting children.

He discussed challenges of the state transferring prisoners back to local jails without providing long-term funding for mental health services “and the Sheriff was silent about it,” referring to Sheriff Bill Gore.  “I would be in Sacramento pounding on the Governor’s desk demanding that they send the counties money so that they can do the drug treatment.”

Asked what more can be done to get word out early on about missing teens,  he said, “Sheriff Gore really fails our deputies in the field when he doesn’t provide the resources…the tools that will allow them…to use social media to get the word out about these runaways so that they can’t be victimized…” and help bring them home in the critical early hours.

He also pledged to restart a Facebook page, which Sheriff Gore took down due to negative comments.  “I would use every avenue of  social that I can as Sheriff to be able to communicate with the public…The current Sheriff is afraid for the public to know what’s going on in its Sheriff department.’

ECM asked Myers about  our investigation into long response times by the Sheriff Department in rural areas.   Myers said he has worked out  in the rural area and noted that deputies do not live there so response time “could be an hour…I am absolutely committed to trying to find a way to have a faster response.”  When anyone calls for help, they should be able to expect a reasonably fast response, he added.

On militarization of police departments,  he recalled an armored vehicle used to save the lives of kidnapped children as a legitimate use of force, but said there is no legitimate use for items bought by some law enforcement departments, such as rocket launches and bayonets.   Similarly, drones have legitimate uses but should not be used to spy on people, he said.

Myers has worked on the 2003 and 2007 wildfires.  He envisions an app that the public could dial to get information on safe routes during wildfires provided  via drones, as well as to view videos and check up on livestock and pets.

Myers wants to stop the school-to-prison pipeline and help reduce recidivism.  “We really can have an impact starting with our kids,” he says, adding that this is an area he’s been working on. “The restorative justice process has been proven to work, especially with kids,” he says, adding he hopes to involve both communities and law enforcement in this process.   He also wants “wrap around services” so that when someone is released they are less apt to reoffend, such as job training, drug treatment, etc.

He would like to assure there is transparency and accountability in asset seizures, while using some asset seizure funds to help house mentally ill long term, provide help for veterans, and other community based benefits.  He suggested there is not adequate oversight currently on how asset seizure funds are spent.  He also believes that a criminal conviction should be required before a home or vehicle is seized, which can harm families.  “We don’t need more homelessness,” he says.

“Within our department we have thousands of people that want to do the right thing as far as communications with communities, but when that’s not shared at the top, and you fear retaliation, it’s very hard to do that,” he concluded.

He says he looks forward to bringing a “progressive policing” agenda to the San Diego Sheriff’s office if elected in 2019.

For more information on Dave Myers and his campaign you can visit his website at www.DaveMyersforSheriff.com .