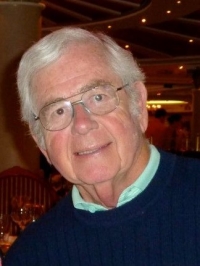 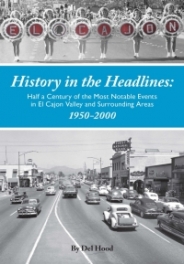 June 27, 2016 (San Diego’s East County) – Recently, East County Magazine sat down with Del Hood, long-time news editor of the Daily Californian and author of the new book History in the Headlines: Half a Century of the Most Notable Events in the El Cajon Valley and Surrounding Areas 1950-2000.

He recalled some of the most memorable stories of his career, as well as the fascinating history of our region.  This interview originally aired on the East County Magazine Show on KNSJ 89.1 FM Radio. To listen online now, click the link above. (Note: sound files can take a few moments to load.)

Hood, a graduate of Hastings College and the University of Nebraska School of Journalism, worked for the Baker (OR) Democrat-Herald and Eugene (OR) The Register-Guard and earned his master’s degree from the University of Oregon. He spent 30 years as an editor of The Daily Californian in El Cajon.

He received many awards for his writing from Sigma Delta Chi, California Newspaper Publishers Association, San Diego Press Club, Associated Press and other organizations. His memoir, The Triumph of Belva Jane, was published in 2015.