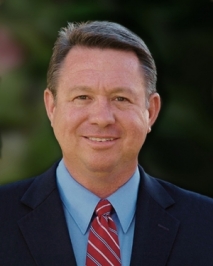 December 28, 2017 (El Cajon)—El Cajon Mayor Bill Wells was our guest for an in-depth interview on our radio show last week.  You can hear the full interview, originally aired on KNSJ, by clicking on the “audio” link.  Our topics included the performing arts center, a major new goal for helping the homeless, and economic revitalization in the community.

Mayor Wells shared details about the city’s exciting new partnership with Live Nation to reopen the East County Performing Arts Center.  The Mayor, who plays several musical instruments, recalled how music made a big difference in his own life.  “It was the first thing I was really good at,” he reflected, also sharing a humorous anecdote about how he talked his way into the school band as a youngster growing up.

He talked in depth about homelessness—and shared an ambitious goal for the future. Much has been written about the city’s controversial temporary ban on feeding the homeless in parks during the hepatitis outbreak, as well as recent landmark steps that the City Council has taken to help the homeless in other ways.What you haven’t yet heard is that Mayor Wells is planning a trip to learn more about a supportive housing model that he hopes could be applied in El Cajon to ultimately provide shelter for more homeless people in a compassionate, supportive and secular setting that would also offer services needed.

Wells brings unusual insights to the issue, as a mental health professional who works in an emergency room where most of his patients are homeless people.

On the heels of his state of the city address, Mayor Wells also talked about other changes coming to El Cajon, such as bringing in car dealerships and hotels to help boost the city’s bottom line without raising taxes.

In an era of often divisive partisan politics, Mayor Wells comes across as a compassionate conservative who cares about his community while staying true to his values and not forgetting his roots.