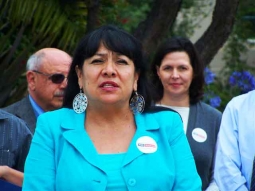 Hear our interview, originally aired on KNSJ 89.1 FM radio in January,  by clicking the audio link, and scroll down for highlights of how Esetela de los Rios believes  our region’s homeless problems could and should be solved .

February 18, 2017 (San Diego)—Estela de los Rios with CSA, a fair housing and human rights organization in El Cajon since 1969, is calling for  a change in how the homeless are treated in the city of San Diego and across San Diego County.  San Diego now has the fourth highest number of homeless people in the nation according to the federal Housing and Urban Development (HUD) agency statistics.  Yet instead of providing meaningful help to homeless people, San Diego has often resorted to criminalizing homelessness—passing out citations for sleeping in public places and having police seize tents and sleeping bags even amid cold winter storms.

Homeless has affected every city in San Diego County,  including East County cities of El Cajon, La Mesa, Lemon Grove and Santee, as well as unincorporated areas of the County. As San Diego cracks down on homelessness, more homeless people have resorted to camping along river banks,  in parks and on the streets of communities in East County, where homelessness is a problem for every city.

De los Rios calls San Diego’s treatment of the homeless “appalling.”  In midwinter,  during the rainy season, many homeless people huddled under trees or freeway overpasses,  since the city had no winter shelter during the coldest months.   Sharp rocks were placed under an overpass where homeless often slept, making their plight even more miserable. Some have died of exposure and recently a mother gave birth in a tent on a city street.

As a fair housing advocate who has attended many meetings and participated in East County’s new regional task force on the homeless,  de los Rios offers two suggestions for helping short term.

“One is a rotating shelter,” she says.  She envisions a network of churches and other nonprofit organizations filling the gap that cities aren’t filling.  “Everyone would play a role,” she says.  Maybe different churches could offer short-term shelter each month.  Perhaps one would offer to feed the homeless, while another might offer an employment fair,  or services such as healthcare, mental health and  a substance abuse program, with a goal toward helping homeless people to become self sufficient.

A second model that has been tried successfully elsewhere is to send outreach workers out to assess the needs of homeless people and find out what resources they need.  “That’s an easy assessment…Just imagine how many homeless families would be on the road again to be self-sufficient, find a job, find housing,” she says.

She believes each city in our region should do its fair share to help with allocations.  The homeless problem has become so severe that even hoteliers in the tourism industry are calling for action.  “The industry is very concerned because now tourists will come to SD and see scenes of homeless people out in the streets,” de los Rios says.

Mayor Sanders has been talking about running for Governor of California.  But to many,  he’s been heartless toward the homeless. “He doesn’t care about the city of San Diego; he cares about his political career,” says de los Rios.

She says that making housing affordable should be an attainable goal, since each city has an allocated plan and HUD allocates block grants to all cities that are intended for affordable housing.  But she says many local mayors and councils divert some of those funds to other uses, such as fixing potholes.

“I believe that homeless is a priority in every city,” she says of our region, noting that she walks past homeless people’s tents each morning on her way to work in El Cajon.

Last year, the County Grand Jury issued recommendations for East County’s cities to do more to help the homeless. Some cities implemented some of those recommendations, others largely ignored them.

One positive that has occurred is establishment of an East County Regional Task Force on the Homeless. It includes representatives of all local cities as well as law enforcement and business leaders.  That’s resulted in social workers going out with law enforcement officers to meet with homeless people and advise them about resources.

De los Rios calls it a “good thing” to do assessments but adds,  “I also believe we need immediate attention to our homeless. They need short-term shelter, perhaps, but they also need resources” such as healthcare, mental health and substance abuse counseling. “Lives are involved.”

She adds, “Sadly we do receive a lot of calls where we do have homeless veterans seeking shelters, the shelters are just ripping from the seams.  There are not enough shelters.”

She says cities have an obligation under the Fair Housing Act to provide housing and not discriminate based on economic fators. “There needs to be money allocated for affordable housing so everyone has an opportunity to be in a safe environment,” she says.  If that means taking money from other programs, she adds, “That just has to be done. Homelessness should be a priority for the entire region of San Diego.”

For residents who want to help,  she offers several suggestions.   You can sign a petition asking San Diego to stop criminalizing homelessness on Change.org at https://www.change.org/p/san-diego-mayor-kevin-faulconer-emergency-humanitarian-action-to-stop-making-homeless-people-in-san-diego-criminals .

Second, you can contact your city’s mayor and other officials and ask them to provide help and housing to the homeless, not make them criminals.

Third, you can volunteer, donate, or get other nonprofits to assist in forming a network of groups to help the homeless by contacting  Estela de los Rios at CSA at (619) 444 5700.  “We would really appreciate any help, assistance or volunteer work for our homeless population,” she concludes.