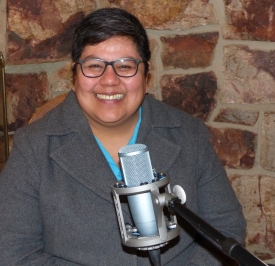 Daughter of immigrant parents, if elected, she will be the first LGTBQ Latina in Congress, where she wants to focus on needs of working families and communities. On the City Council, she’s worked to expand affordable housing and protection for renters, as well as implementing the city’s climate action plan.  She holds an environmental degree from San Diego State University and as former associate director of the Environmental Health Coalition, led a campaign to protect children from toxic chemicals in neighborhoods.

The 53rd Congressional district includes the heart of the city of San Diego as well as La Mesa, Lemon Grove, part of El Cajon, Jamul, Chula Vista, and more.

Hear our interview, originally aired on KNSJ 89.1 FM Radio, by clicking the audio link, or scroll down for highlights.

Gomez says she is running for Congress because “we need the federal government to really invest in our communities” which need better education, infrastructure, jobs and housing in her view, as well as to prioritize addressing the climate crisis.

On healthcare, she supports Medicare for all as the “ultimate solution” but realizes this will take time. She wants to find a path to build support for this while meanwhile protecting those without insurance or whose insurance isn’t affordable. “Trump is attacking what we already have,” she says, noting actions that have weakened the Affordable Care Act.

She firmly believes in protecting and expanding Medicare and Social Security for seniors, which is also under attack. “We’re going backwards,” she says, adding that she believes security in retirement years “should be a basic right.”

Expanding affordable housing and reducing homelessness are key goals for Gomez, who has been engaged on those issues at the local level.  She notes that Trump’s budget calls or cuts to Housing and Urban Development funds when already, the wait for section 8 housing vouchers for rental assistance here is over 10 years. She pledges to “really fight” for more resources to help low-income people and create more affordable housing.

She notes that California’s homeless population has grown, but HUD’s formula for distribution resources is outdated. She promises to be a “strong champion” to advocate for Califrornia getting a fair share.

Gomez supports a Green New Deal and opposes Trump’s withdrawal from the Paris Climate Accord, as well as rollbacks in clean air and water protections.  She calls climate change the “most important issue that we are facing” and wants California to serve as a model for its legislation requiring cities to create climate action plans to reduce greenhouse gas emissions.  At the city level, she has supported San Diego partnering with La Mesa and other communities to form a community choice option for purchasing clean energy, another model she’d like to see applied across the nation.  However, when it comes to siting large energy projects such as wind turbines, she wants the conversation to include impacts on communities and on people’s quality of life.  She calls this “critical” to avoid negative impacts such as some seen in East County near large wind projects, and also would like to see energy projects sited near existing population centers and infrastructure.

On transportation, she wants to see a combination of transit but also improving freeways in East County to avoid gridlock and reduce emissions.

As a first-generation American born in San Diego to immigrant parents from Mexico, she is deeply concerned about immigration and border issues.  Her parents were documented and came here after U.S. trade policies “wiped out” agriculture in Mexico and took away their jobs “They fled because they wanted to provide a better opportunity for their children,” she notes. She wants trade talks to include impacts on people in other countries, such as reduced wages. and on migration from other countries to the U.S..  She also wants discussion on immigration to not be through a “lens of hatred and fear” but to instead focus on a more “humane approach.”  She is also concerned for those who flee due to safety or violence concerns.

She is appalled by the U.S. separating families at the border and by children behind bars, as well a forcing immigrants to wait in Mexico where many are subjected to violence or illness. She wants to change policies such as the Border Patrol refusing to allow doctors to offer free flu shots at a local detention center where people have been dying of the flu.  “I’m not arguing that we need to tear down our entire bordres and just create a free flow,” she says, “but we do need better checks and balances,” noting that most immigrants come here for economic opportunities or are fleeing violence, and are not dangerous.  “We don’t need more militarization of the border,” she says. “We need to look at it from a humanity aspect and being good neighbors.”

Gomez had criticized the economy under Trump as working for billionaires while working families struggle to make ends meet.  She blames trade policies for shipping manufacturing jobs overseas.

“We need to bring that back. We don’t have enough middle income jobs,” Says Gomez, who sees opportunities to create new good-paying jobs in technologies to address climate change under a Green New Deal. She also wants to move forward in Congress on a new transportation bill to create jobs rebuilding roads, bridges and dams across America, similar to what was done under Franklin D. Roosevelt to put Americans back to work and end the Depression.

She is a supporter of labor unions, however when asked about the PRO Act in Congress that protects the right to organize, she acknowledges that protections are needed for Mom and Pop businesses and independent contractors to avoid the types of problems that AB 5 has generated in California.  She says there is “good” in the boom of alternative ways of doing businesses, but there have also been “mega industries taking advantage, such as Uber and Lyft.”

Reforming the criminal justice system to make it more equitable for “brown and black people” is a priority of hers.  She notes that lack of access to attorneys and lack of economic opportunities as well as racism result in higher rates of incarceration among people of color than whites. She wants to increase access to education and good jobs to help break the school to prison pipeline, and make sure working parents can be involved in children’s lives, instead of just building more jails and hiring more police.  “We need to start shifting our priorities as a nation,” she says.

She is concerned about mass shootings and protecting school children’s safety.  “The Second Amendment doesn’t call for a free for all,” she says, adding that she wants “checks and balances.” She supports gun licensing, universal background checks, locking guns up when not in use, and restricting certain weapons used in mass shootings. She wants a conversation about “real solutions” but not taking away people’s guns.

On foreign policy, she says she’s been involved locally in “going to Mexico and building relationships with the new government entity there.”  She believes that U.S. foreign policy should not be about imposing orders on how other countries should be run, but instead offering a supportive arm “to lead to democracy in other countries.”  She supports a two-state solution for Israel and Palestine and faults the Trump approach to Iran for exacerbating tensions in the Middle East.

While she would support some cuts in military spending, she notes that San Diego relies heavily on a military economy.  “We need to invest more on supporting families,” she says, calling for building more military housing locally and investing in transition plans to help veterans and spouses find jobs and housing when they leave the military. She calls it “shameful” for men and women who served our military to wind up homeless.  She also wants to be sure promises are kept to undocumented people who were promised citizenship if they served our country.

To pay for programs such as broader healthcare coverage, she supports closing tax loopholes on corporations that often pay less than small businesses.

She hopes to serve on the House transportation and infrastructure committee if elected.

Her financial support for her campaign is grassroots, mainly from individuals as well as labor groups representing teachers, nurses, trades and more.  “I actually took a no corporations, no PACs pledge,” she says.

In conclusion, she says as a first generation San Diegan born here, she has been “working my entire life to improve the quality of life of all residents, and most importantly, the under-served residents. That’s the community I come from.” She believes government has a responsibility to invest in people, in the environment, and in creating “stronger bridges leading to a better, prosperous life for all of our citizens.”

You can learn more at https://georgettegomez.org/.