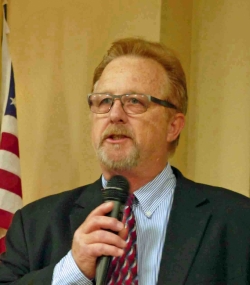 July 21, 2017 (San Diego’s East County) – Recently, Glenn Jensen joined us on the East County Magazine Show on KNSJ to talk about his candidacy against Rep. Duncan Hunter in the 50th Congressional District.  A Democrat who calls himself a “recovering Republican”, he’s a lifelong resident of the district,  a graduate of Helix High School who raised his family in East County, helped save homes in the Cedar Fire, and works in information technology sales.  You can hear his full interview by clicking the audio link or scroll down for highlights.

Jensen says he’s running to “set this country back on track” with integrity and a progressive but fiscally responsible agenda.  He’s also concerned about the criminal F.B.I. and Justice Department investigations against Hunter.

“It’s obvious to me he’s been enriching himself …but has not introduced any legislation to benefit his district,” says Jensen, who calls Hunter's lavish spending of campaign funds on personal uses "pretty damn close to embezzlement." Those expenses included a family vacations to Europe, jewelry, dental bills and airfare for the Hunter family's pet rabbit.  (Hunter has denied wrongdoing, but did borrow money to repay $62,000 to his campaign. Hunter has since spent nearly all of his recent campaign contributions on his legal defense.) 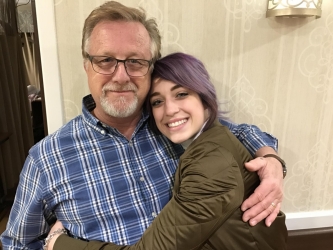 Jensen sees problems with both Obamacare (the Affordable Care Act) and with Republican alternatives. Instead, he wants to move toward “essentially Medicare for all,” noting that Medicare is very efficient as well as affordable.   He views healthcare as a national security issue but also considers fiscal responsibility with regard to every issue.   For Jensen and his wife, healthcare is personal, since they've had a son with Cystic Fibrosis and he understands the importance of quality, affordable care. He also wants to be sure quality, affordable for aging Americans. An advance of Medicare for all is  that you won’t have to deal with insurance companies that “want to maximize benefits and minimize payouts.”

He believes national security and budget accountability are important – and his definition of national security includes not only defense, but also protection of quality of life and freedoms here at home. If people are losing homes and businesses, or don’t have healthcare protection, or protection against polluted air or water, then our freedoms  are impinged. He wants to restore “things that make America strong” but adds, “financial responsibility doesn’t mean we have to be austere…we can achieve a progressive agenda and pay for it.”

He’s critical of the partisan divide in Congress and places blame largely on extremists in the GOP.  “I was raised in a Republican family. That was back in the days when Dwight Eisenhower was president…an era when personal responsibility and shared responsibility were fundamental to the Republican party.” He says that promoted “tremendous growth and a vibrant middle class…there was respect for diverse opinions,” but that’s lacking now in Washington D.C.

His disillusionment began when Ronald Reagan, as California Governor, slashed funding for the University of California and intensified with the Iran Contra scandal. “I’m still a competitive guy. I still believe in personal and shared responsibility…but the Republican party has lost their way and left those values in the dust,” he says.

He has experience in Washington D.C., having spent six years working with Al Gore on the Senate Commerce Committee’s Telecommunications Subcommittee on legislation for small dish network and direct TV programming.  Today, he’s concerned about efforts to revoke net neutrality, a move that could establish “winners and losers on the Internet” and “constrain the free flow of information.”

He voiced concerns over Hunter taking large sums from the telecom industry and then voting to allow Internet companies to sell browsing history of users, an action Jensen likens to “an assault on our Fourth Amendment Rights” so “completely un-American that anybody with a shred of integrity should have voted against it.”

He believes cybersecurity is a big concern, including Russian efforts to hack U.S. election systems in at least eight states.  He views the prospect of a foreign power seeking to change the outcome of an election as “cyber terrorism” and wants investment made to prevent such intrusions, as well as foreign intrusions such as Iran’s penetration of the Navy Marine Corps Internet in San Diego and hackers theft of consumer data from retailers such as Target. “We can ill afford not to make those investments,” he says.

On border security, he opposes the wall that Hunter and Trump support, given other spending priorities such as healthcare and counter terrorism.  “We already have electronic surveillance and counterintelligence that can pick up any intrusion at the border,” he notes.  He supports immigration reform, noting “Reagan did it previously” to get people out of the shadows, protect vulnerable children and stop breaking up families. “If we’re serious about family values, then it’s important we get immigration reform done,” he says.

As a businessman he invites businesses to tell him about any regulations that negatively impact your business so that it can be eliminated, while keeping regulations that protect businesses and consumers from rip-offs and pollution. He voices concern that Trump is moving to eliminate protections against clean air and water, and believes polluters should pay the cost of cleanup.

I’m a huge believer of science,” he says, adding that observed data shows “clearly” that humans are impacting climate, citing dying coral reefs, rising sea levels and meltilng ice packs as examples. He notes that leading climate scientists here at UCSD and Scripps Institute also led research efforts to that fund new treatments for cancer and discovered the hole in the ozone.  Not taking steps to stop climate change will lead to coastal flooding with devastating impacts, since 80% of the world’s population lives near coastlines, he points out.  Yet Trump and Hunter are both climate change deniers.

He supports investment in clean energy alternatives such as solar and new technologies like photovoltaic windows with nanotubes, but believes the federal process for weighing energy projects on public lands should include “honest, authentic discussion with residents” to avoid projects with negative community impacts. “The future is really bright, but we have to allow the public to interact and provide the right incentives.”

Jensen helped save neighbors’ homes in Blossom Valley during thet 2003 Cedar Fire, along with three other neighbors, using just garden houses and sprinkler whirlybirds. “There weren’t any resources,” he recalls. There were no firetrucks and as a Ham (amateur) radio operator, even though he was able to reach fire authorities they would not send hoses,  since residents had no formal training to use them. “Had we stopped those fires in Blossom Valley, Harbison Canyon never would have happened,” he said.

We need a Congressman who will champion things that directly affect our district,” Jensen adds. “I would have town halls and they would be open and available for everyone whether they have different opinions than me or not…A Congressman works for us…He needs to pay attention to what you or your neighbor is interested if doesn’t do that you should fire him.” He adds, “Duncan Hunter is afraid of his constituents.”

He criticizes the education policies of Education Secretary Betsy Devos. “Her big push is to promote vouchers” which “basically give a subsidy to anyone going to private school” while taking money away from public schools. “Let’s call it what it is:  a big lie,” he says of vouchers. “If we’re going to have a qualified work force to address the new economy, we have to make the investment” in public schools, including college and vocational education. “I went to public schools. The University of California is the 17th best public university in the world…I’ve made a good living for my family.”  He says the investment pays off, since well-trained workers are more productive, and companies with productive workers pay higher taxes.

He also supports a civilian bill similar to the G.I. bill, where students who get college tuition paid, or vocational training, or elder worker retraining, give back to the community through some form of community service, for example.

He voices concern about the current administration’s “breathtaking” assault on women’s rights, minority rights, gay rights and religious freedoms. He faults Hunter for backing Trump despite those actions.  “I believe in liberty,” he says, adding that the Constitution allows people to expand their freedoms as long as their rights don’t conflict with others’ rights. “For some reason many of these alt right people are perfectly willing to take away rights…we should be expanding liberty, not contracting it.” 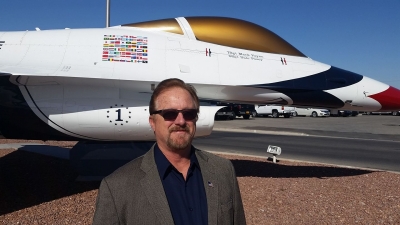 On foreign policy, to combat terrorism he wants to see more embedded covert operatives  to increase U.S. intelligence instead of relying largely on foreign intelligence sources. He also believes the U.S. needs to look at systemic causes of conflicts in the Middle East while being vigilant about domestic terrorism threats at home.

Asked if he’s tough enough to stand up to lobbyists and special interests, he replied, “That should be asked of every candidate across the nation.” He says he’s not a career politician and is running to make a change that will benefit constituents in the district.  He believes working in the “rough and tumble world of information technology and the defense community” has taught him how to build coalitions, a needed skill in politics.

But perhaps most importantly, he adds, “I’m fearless,” adding, “I can’t be bought…my hope is to bring a mature firebrand approach to how we address the needs of our district, number one, and our nation as a whole.”

He wants to hear from our listeners and readers “because I work for you, not the other way around.”

You can learn more about Glenn Jensen and his candidacy at www.VoteJensen.com.