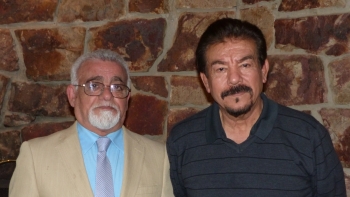 Cllick this audio link to hear our interview, or scroll down to read highlights.

These humanitarian leaders are fighting for justice and filing suit to win financial reparations from the Iraqi government for1.2 million Iraqi refugees around the world, including over 80,000 in East County. They have also met with top dignitaries in Iraq in an effort to help the nation’s new government rebuild Iraq.

Sanati came to the U.S, as an Iraqi refugee back in 1975. He soon began working to help other refugees forced to flee their homeland under the Saddam Hussein regime and later, those displaced by the U.S. invasion of Iraq and Iraqi minorities who fled persecution by ISIS.

Sandoval’s efforts to help refugees began with healthcare and expanded into human rights, ranging from Mexican immigrants to Iraqi refugee.  He says many people are not aware of their human rights under the United Nations Declaration on Human Rights and the Declaration on Indigenous Rights.

He and Sanati believe in going to the root causes that force refugees to flee, such as extreme persecution. “People are actually coming the door and killing your family,” he says of what many in Iraq have faced including Christians, Yazidis, Assyrians, Jews and others.

Sanati affirms, “They call us traitors because we are tied to the west…We are targeted for genocide.” 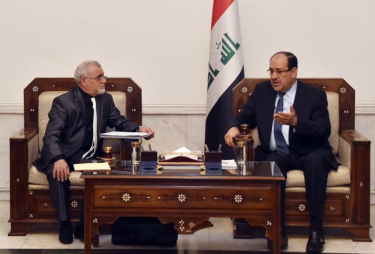 In 2017, Sanati and Ramiro traveled to Iraq upon invitation from Noori Al-Maliki (photo, right). There they met with political leaders from all factions. “All of them agreed we have rights,” Sanati says, but adds that politicians there claimed they had to worry first about millions of recent refugees in despearate situations.

They published a report on their findings.  Read the report summary here.

After years of negotiations, Sanati says he is preparing to file a lawsuit in international justice court to seek financial reparations from the government of Iraq on behalf of nearly 15,000 Chaldean Christian families displaced from Iraq.

The Obama government was viewed in Iraq as largely ineffective, particularly toward aiding Christian and other minority refugees, though Secretary of State John Kerry did issue a genocide declaration. Recently an ambassador came to San Diego to meet with local Chaldeans, but with the change in power in Washington, they’ve had to reach out to new  contacts in the Trump administration.

They hope to return to Iraq in the fall.  Presently the government remains in disarray.  An election was held in May 2018, with a new prime minster named in the fall, but cabinet officials were still being appointed as of our January interview. “We don’t know if the government will be a success or if it will fail,” said Sanati, adding that a struggle for power between the United States and Iran  is key to the conflict.  Sandoval says the spread of ISIS, or ISIL, ideology across Europe has also been problematic.

Sandoval says the people of Iraq want a framework for development and “technocracy” as well as an inclusive constitution.  But religious factions are preventing a constitution from being implemented.

In his view, the U.S. made a mistake in invading Iraq under President George W. Bush, so the U.S. has an obligation to help set things right. Now President Donald Trump’s announced plans for an abrupt withdrawal of troops from Iraq and Syria  “affects everybody and everything in Iraq.”   Some 90 different armed militia groups remain and corruption is rampant. Massive sums of money have been stolen by the Iraqi government from its people, Sandoval says, adding that officials openly admit to the corruption.  As an oil rich region, Iraq has long attracted outsiders seeking to grab wealth and displace indigenous people—a problem Sandoval says is being worldwide in places such as Brazil.

Sandoval cites an example; contracts to build homes were left unfinished due to corruption. Trump has proposed giving contracts to companies like Exxon, but Sandoval has a different idea.

“We took out our army, but now let’s end in an army of technicians and technocrats to get this done, as we promised.” He adds that this would create jobs as well as stabilize the region.

The Chaldean church is also a factor; at one point France gave permission for some Iraqi Christians to go there, but the church refused to allow it, wanting to preserve Christianity in Iraq despite the dangers there.

Sanati says, “We need a very strong effort from the U.S. administration because they are the only ones who can change things in Iraq…To solve things in Iraq, they nee to solve problems with Iran.  If they can do that, Iraq will be stable, and Iraq will [again] be one of the most beautiful countries in the world.”  For centuries, Iraqis lived together in relative peace, he recalls.

Despite many challenges, he sees hope on the horizon to restore democracy and human rights to Iraq, the cradle of civilization and birthplace of Christianity, according to Chaldeans.

“Our government admits that was a mistake, invading Iraqi, but now they are,” Sanati says, noting that his homeland has been at war now for some 15 to 17 years. But he resolves, “We will keep fighting until we find some way to clarify all this mess.”