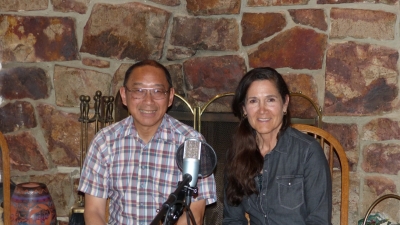 July 5, 2019 (La Mesa) – Should La Mesa form a citizens’ police oversight or advisory commission? Jack Shu, a former Superintendent of California State Parks and Janet Castaños, a former dean in the Grossmont-Cuyamaca Community College district and past president of Helix Charter High School’s board, have a proposal that will soon be considered by the La Mesa City Council.

We interviewed them on our East County Magazine Show on KNSJ.   You can hear the entire interview by clicking the audio link, or scroll down for highlights.

The San Diego County Grand Jury recommended in 2016 that all East County cities form police oversight or advisory groups, but La Mesa at the time opted against it, arguing that there had been no serious complaints against their police department.

But in January 2018, a La Mesa Police Officer at Helix Charter High was shown on a viral video knocking a female student to the ground.  The city funded an investigation by an outside consultant but due to privacy rules, only the police chief was allowed to read the report, which exonerated the officer of wrongdoing. The former student has filed a lawsuit against the city.

“Any good law enforcement agency needs the trust of the community,” says Shu, who contends that an oversight or review committee provides a key link to the community. He says Police Chief Walt Vasquez has been very open on discussing the matters. “We’re very fortunate to have a good police chief,” he says.

Castaños says they have also met with the police officers association in a “collegial and collaborative” manner.

They have also reached out to citizens and seek input from a wide variety of stakeholders including communities of color, the business community, the homeless, and the faith-based community.

Castaños says the election of Dr. Akilah Weber has brought new interest in social justice concerns. “She is very respected and honored among the city council members,” she says, adding that Weber’s mother, Assemblywoman Shirley Weber, has led efforts in Sacramento to improve transparency regarding police use of force.

Shu believe oversight is ultimately a win-win for both police and citizens, noting that lack of transparency in recent years has led to an erosion of the public trust in law enforcement across the nation.  “That’s how law enforcement gets its power, is through community trust.”

A key potential difference between an advisory and oversight committee includes subpoena power.  Other issues include how committee members are chosen to assure inclusivity and fairness to all.

Currently, the police investigate any citizen complaints with no oversight by citizens nor even the City Council, Shu notes.

He and Castaños hope the Council will take action to form a task force in the near future on creating a citizens’ police review or advisory commission. The police are expected to make their own presentation on the issue this month.

Shu encourages the public to voice their views to Council members and suggests that if the Council doesn’t take action, a ballot measure could be brought before voters.

“We want the best kind of law enforcement agency we can have in La Mesa,” he concludes.

Does your idea of citizen involvement mean "conduct research, generate new ideas or solutions, and provide informed recommendations on public policies and practices" ? Or a "policy-making body" ? "Law enforcement leaders cannot transfer their administrative accountability and legal responsibilities to a citizen board."

To help us all better understand, could you please elaborate and share more on your stated long history in San Diego and how it relates to what you’ve observed and learned regarding the checks and balances that manage the internal affairs of our Police Departments? How would Citizen involvement, by a group of competent and suitable volunteer professionals, interfere with our Police Force?

Too often, people with good intentions interfere with our police force. In my long history in San Diego, I have learned that there are checks and balances that most often take care of internal affairs. Building bureaucracies upon bureaucracies is not my idea of oversight.