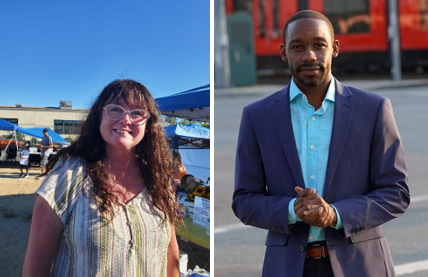 Update: After this interview aired, the City Council voted to reopen the Lemon Grove Recreation Center one day a month, on Saturdays, in a win for citizen activists.  Watch for an in-depth story on the Council action soon.

July 19, 2022 (Lemon Grove) – The Lemon Grove Improvement Council , a nonpartisan organization, was founded by citizens eager to help to fulfill needs of the community, a city with limited revenues. A key goal of organizers is to see reopening of the city’s recreation center, which has been closed for more than a decade.

Jessyka Heredia and Chris Williams from the Lemon Grove Improvement Council sat down for an in-depth interview with East County Magazine editor Miriam Raftery, originally aired on our radio show on KNSJ.

Heredia hopes to partner with the city.  “If we collaborate together as a team, we can get it done….We’re here to help.”

“We thought this would be a great idea to hold a festivals as a kick-off,” Williams says. “There was an incredible amount of participation. It was awesome to see so many smiling faces.”  He praised the many community members who pitched in to help.

“We estimated between 350 and 400 people” at the event, Heredia says.  Toyota of Lemon Grove, Giardino’s Italian Cucina and San Diego Pet Hospital sponsored the event. Vendor fees, a raffle, and donations of sold helped raise a couple of thousand dollars in profits, with donations continuing to come in.

The donations are flowing to a partner organization, the Neighborhood Enhancement Organization (NEO),  that has filed for nonprofit status with the state and federal government. The NEO has provided documents to ECM confirming this.

The community effort got the attention of the city council, which held a discussion this week on reopening the recreation center. (Watch for ECM’s article with an update on the council actions soon.)

Williams hopes to see the city commit to pitch in some funds to help get the recreation center reopened. Currently fields are open, but the structure remains closed, without the many activities once held there.

Heredia says the group hopes to host another Citrus Festival next year, from 7:30 to 9 a.m. bigger and better.

The Lemon Grove Improvement Council has a running club each Saturday, followed by pickleball at the rec center.

The group has been partnering with Cal Trans for several years to help clean up trash along freeway on and off ramps. “We look forward also to planting native trees and plants,” Williams says.  “Beautifying our area has been one or our goals,” to make the area clean, safe and attractive for businesses.

Another plan is to beatify electric boxes, in partnership with SDG&E.

In addition, the group is organizing a back-to-school drive for businesses to host drop-off sites for people to donate items for schoolchildren.

“If we want things to change, not just Lemon Grove, that’s anywhere, we have to get involved,” Williams says. He encourages people to volunteer, become sponsors, and share activities on social media. “I’ve personally met so many new friends that without doing things like this, I would never have met. It’s exciting- and it’s addicting to get out there and be the change you want to be..You can make a difference, you just need to get involved.”

Correction: An earlier version of this article stated that the Lemon Grove Improvement Council is a nonprofit.  It is nonpartisan, but not nonprofit. Donations to reopen the Lemon Grove Recreation Center are going to a partnering group, the Neighborhood Enhancement Organization, which has provided documentation of its nonprofit filing with the state of California and a federal EIN number issued by the IRS.