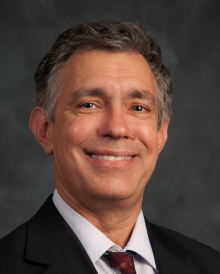 Listen to the audio link to hear the full interview, and scroll down for highlights.

"Certainly, I would make sure that I would conduct myself in a way that litigants would know that whatever their background, they are going to be listened to, they are going to get a fair shake, and decisions are going to be made based on the evidence in the case and not based on other factors or biases. I think those are the most important prerequisites for being a good judge." -- Tim Nader

Nader has criminal , civil and family law experience. He  worked for the state Attorney General  for many years.  He later served as Mayor and City Councilmember in Chula Vista, as a nonprofit executive director, as a community college board trustee, and  as a child support attorney for the County before returning to the Attorney General’s office.

His opponent, Judge Gary Kreep, was censured by the State Commission on Judicial Performance , which found Kreep engaged in 29 acts of judicial misconduct. demonstrating lack of judicial temperament and ran his courtroom in a manner that suggested bias. Kreep made derogatory comments about women attorneys, minorities and people with cases him, among numerous other controversies.

Nader says, “Certainly I would make sure that I would conduct myself in a way that litigants would know that whatever their background, they are going to be listened to, they are going to get a fair shake, and decisions are going to be made based on the evidence in the case and not based on other factors or biases. I think those are the most important prerequisites for being a good judge."

He also believes it is important that people have confidence that a judge “is applying the law and is not applying some pre-disposition to the case.”

He notes that he helped oversee the cleanup of the Southwestern Community College District's board, which had members convicted of wrongdoing before he was elected. As a public official in the diverse South Bay community, he says he has experience working with a wide range of people.

At the Attorney General,   a key case resulted in victim restitution for a woman injured by a drunk driver as a part of rehabilitation. In another case he got a ruling that three gang members were all guilty in a shooting where each blamed the other two defendants.

He voiced pride in Chula Vista for both increasing its police force with the best equipment that could be afforded while also engaging new programs for at risk youth such as a midnight basketball league with officers, school and nonprofit programs to teach entrepreneurial skills for nonprofit youths and more. “Chula Vista had one of the biggest decrease in crime following the completion of my term,” he says, crediting a tough law enforcement approach combined with paying attention to social factors that contribute to crime.

Asked what should guide him in making decisions, if  a religious belief differed with the law, he said the U.S. Constitution should always be the presiding law of the land. “I’m a person of faith and I don’t see any conflict between applying my law and my faith as a Christian,” he observed, adding that our democratic society has a constitution which requires equal protection under the law.

A judge with a deeply held moral conflict should recuse himself, he said, noting that he has recused himself in the past on rare occasions to avoid the appearance of any conflict of interest, such as when a board he was on sought an opinion from the Attorney General,  where he has worked.

Asked about hate crimes, which District Attorney Summer Stephan has indicated she wants to crack down on,  Nader noted that not all hate speech is criminal, even if despicable, due to the First Amendment. “When they step over the line and begin threatening the safety of others, then you step over that line.”  He also noted that civil laws can hold people accountable for  speech that causes harm; incitement to violence also crosses into a criminal realm.

On juvenile justice, he notes that judges have discretion to determine what may turn a young offender’s life around. He indicated that drug use often contributes to youth neglect and criminal actions;  rehab for offenders and lengthy prison sentences for drug traffickers are among options he believes could be appropriate solutions.

Asked about causes of the high rate of incarceration in the U.S.,  he says, “quite frankly we have more crime than many other civilized nations,” adding that a key factor is the presence of hard illegal drugs such as methamphetamine. “When I was a prosecutor, 80% of my case load would have disappeared” if not to the access to hard drugs.  As for the disproportionate number of minorities, “minorities are not committing a disproportionate number of crimes.” He notes that there is a disparity in sentencing for types of drugs used primarily by whites vs. minorities, which indicates a systemic bias.

On Judge Kreep, he notes that all sitting judges on the Commission on Judicial Misconduct voted to remove Kreep, but a narrow majority of non-sitting judges opted to keep him on the bench and censure Kreep  “The standards are good and generally the system works fairly well,” Nader says. He sees the biggest flaw as the length of time it takes for cases to work their way through the system to address any issues with judges.

Asked his vision for the future of the judicial system, he  said,  “If we have judges who scrupulously follow the U.S. constitution, who believe in upholding the rule of law and who believe in judicial independence,  I believe the system is itself is designed to work as well as a system can work.”

Nader believes his background in public service “will give me an awareness of our community and social issues, and the interaction between those issues and the law that will make me a better judge than if I didn’t have that background.”

Summing up why he believes voters should support his candidacy, he says “What I bring to the bench is what every judge should be…I think people who have come before me in my quasi-judicial capacities in the fast have found that I am fair, that I listen, and that I deliver a fair hearing…Judges should always listen to the evidence and decide the case on the evidence and the law. Judges should always uphold the U.S. Constitution including the 14th amendment, which guarantees equal protection to all.”

Nader concludes, “I believe that I would be the kind of judge that the overwhelming number of citizens want and deserve.”

ECM requestesd an interview with Judge Kreep, but he did not respond.

To learn more or contact Tim Nader, you can visit http://timnader.com/.